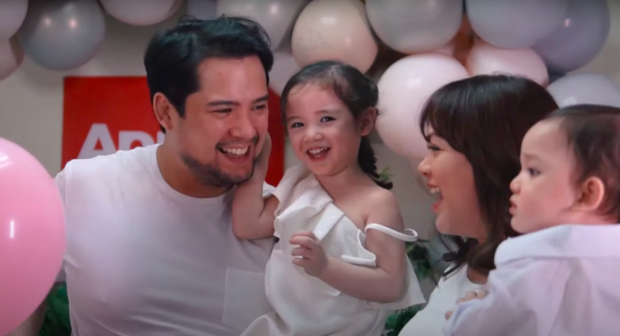 Geoff Eigenmann, left, and his daughter Arabella, fiancé Maya Flores and son Augustus. Image: Screengrab from YouTube/Welcome to the Eigenhouse

Geoff Eigenmann and his fiancée, Maya Flores, revealed that they will be adding another baby girl to their family.

The couple shared their third child’s gender in an intimate celebration, as seen on their YouTube page yesterday, Sept. 25.

The small party consisted only of Eigenmann and Flores with their two children Arabella and Augustus, whom they fondly call Beanie and Angus.

Prior to the grand reveal, they showed video messages from their loved ones who wished them well on their new baby. Among them were Eigenmann’s father, Michael de Mesa, and his aunt Cherie Gil.

Eigenmann then opened a large box that said “HE OR SHE” while carrying Arabella with one arm. Upon opening the box, pink balloons came out of it. Flores could not help but jump while exclaiming, “Baby girl! Oh my God!”

She then stated that she was really hoping for a daughter so that Arabella could grow up with a sister.

Following the reveal, the couple said they have yet to decide on a name for their third child. However, they noted that they plan to give her a nickname related to food similar to her siblings’.

The parents also explained that they always think of the nickname first before the real name. Eigenmann and Flores announced that they were expecting their third baby last July and that she is due in November.

They welcomed Arabella back in September 2017 and Augustus in June 2019.