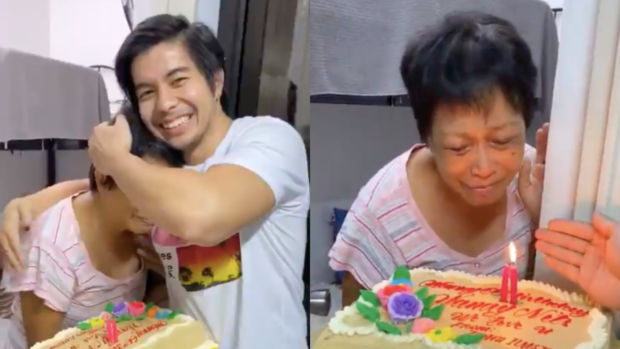 Rodjun Cruz and one of their house helpers, whom they call Manang Nitz. Images: Instagram/@rodjuncruz

Rodjun Cruz and Dianne Medina treated one of their house helpers to a sweet surprise to mark her special day.

Cruz posted a clip of their simple celebration on his Instagram page yesterday, June 29.

“We [l]ove you Manang Nitz! Happy birthday!” he said, adding that the surprise celebration was a success.

Cruz, Medina and their other house helpers prepared for the thoughtful gesture by waiting outside Manang Nitz’s bedroom door with a birthday cake. The actor then led the surprise by suddenly opening her door and shouting “Happy birthday!”

Manang Nitz could not help but shed some tears as the couple and their other house helpers began singing the happy birthday tune and handed her the cake.

Medina also thanked Manang Nitz for cooking food for all of them. Meanwhile, Cruz explained that they all pretended not to know about her birthday as part of the surprise.

Prior to celebrating Manang Nitz’s birthday, the couple held a gender reveal party for their baby at home. However, their loved ones joined them through a video call instead due to quarantine measures imposed to curb the spread of the coronavirus.

During the event, the couple shared that they are now expecting a son. They first announced that Medina was pregnant last April.  /ra