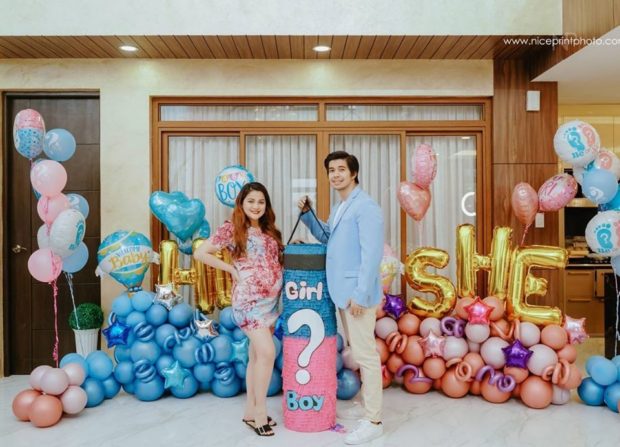 Rodjun Cruz and Dianne Medina have revealed that they will soon be welcoming a baby boy into their family, months after announcing Medina’s pregnancy.

The couple shared their future child’s gender during an intimate celebration in their home, as seen in Medina’s vlog post on her YouTube channel yesterday, June 21.

Medina explained that they decided to have their loved ones attend the party through a video call rather than in-person due to the ongoing COVID-19 pandemic. She also assured their fans that the team helping them in their house wore personal protective equipment and observed precautions against the coronavirus.

The soon-to-be parents decorated a portion of their home with a display of pink and blue balloons and letters that spelled out “HE” and “SHE.” Medina bloomed in a pink and blue dress while Cruz looked sharp in a light blue blazer on top of a white T-shirt.

Along with the decorations, they also had a piñata shaped like a punching bag that contained confetti which would reveal their baby’s gender.

When asked about his preferred gender for their child, Cruz quickly said that he hoped for a son. However, he stated that regardless of the gender, he and Medina would love their baby wholeheartedly. He also pointed out that Medina had been blooming recently, which may mean that they were having a daughter, based on superstitions.

Before they broke open the piñata, they first had a simple trivia game with their family, including Cruz’s brother, Rayver, who sat beside his girlfriend Janine Gutierrez. After the simple game, the punching bag-shaped piñata was lowered to Cruz and Medina.

Cruz then punched the piñata, which released blue confetti. Cruz was elated and happily announced: “It’s a boy!” Following their intimate celebration, Cruz said he was overwhelmed and speechless, while reiterating how their upcoming child is an “answered prayer.” He said he looks forward to bonding with his son through basketball and going to the gym together when their child grows older.

The couple first announced they were expecting a baby last April. They tied the knot in Manila Cathedral last December, two years after getting engaged in Boracay. JB