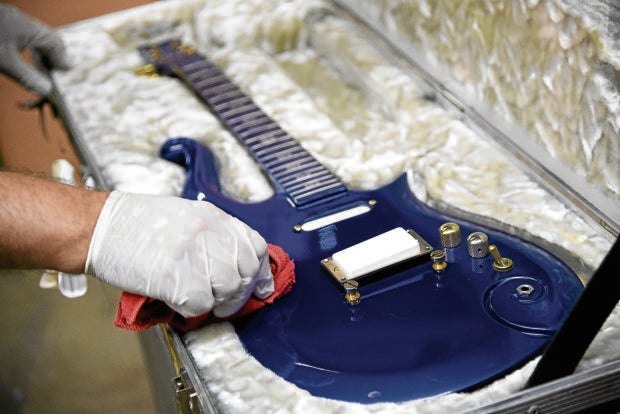 In this May 6, 2020 file photo, the “Blue Angel” Cloud 2 electric guitar custom-made for the musician Prince in the 1980s is polished at Julien’s Auctions warehouse in Culver City, Calif. On Friday, June 19, 2020, the instrument shot past the top estimate of $200,000 it was expected to fetch at the Music Icons sale at the auction house. (AP file Photo/Chris Pizzello)

LOS ANGELES  — The guitar played by grunge rock icon Kurt Cobain of Nirvana during his legendary 1993 MTV Unplugged performance sold on Saturday for a record $6 million, an auction house said.

Another prized guitar that was earlier believed to have been lost—belonging to American singer-songwriter-producer Prince—was sold on Sunday for $563,500, way beyond its earlier estimate just last month of $100,000 to $200,000.

Cobain’s retro acoustic-electric 1959 Martin D-18E, which he played at his band Nirvana’s career-defining performance in New York—just five months before his suicide at age 27—sold after a bidding war to Peter Freedman, founder of RODE Microphones, Julien’s Auctions said.

At $6.01 million after fees and commission, the instrument was the most expensive guitar ever sold at auction, among other records. The starting estimate was $1 million.

Freedman said he planned to display the guitar in a worldwide tour, with proceeds going to benefit performing arts.

“When I heard that this iconic guitar was up for auction I immediately knew it was a once-in-a-lifetime opportunity to secure it and use it as a vehicle to spotlight the struggles that those in the performing arts are facing and have always faced,” the Australian was quoted as saying.

The guitar was sold with its case, which Cobain had decorated with a flyer from punk rock band Poison Idea’s 1990 album “Feel the Darkness.”

Until now, the most expensive guitar in history was a Fender Stratocaster, dubbed “Black Strat,” used by Pink Floyd guitarist David Gilmour.

It had been sold by the musician for nearly $4 million during a charity sale in June 2019. 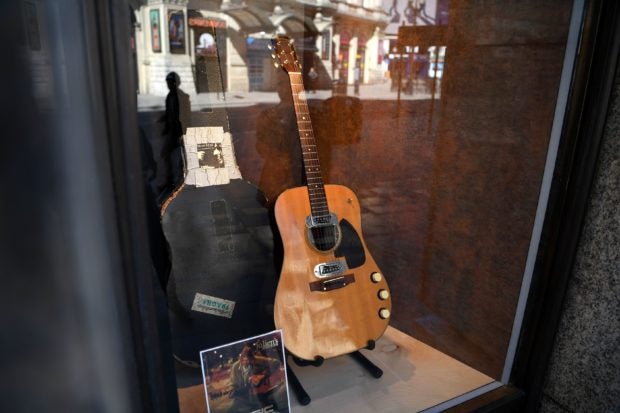 (FILES) In this file photo taken on May 15, 2020 The guitar used by musician Kurt Cobain during Nirvana’s famous MTV Unplugged in New York concert in 1993, is displayed in the window of the Hard Rock Cafe Piccadilly Circus in central London prior to the auction of the guitar in Beverly Hills in June. – The 1959 Martin D-18E featured in the band’s performance in November 1993, five months before Cobain’s death at the age of 27, sold at auction on June 20 for a record $6 million. (Photo by DANIEL LEAL-OLIVAS / AFP)

Prince’s 1984 “cloud” guitar, while it sold for much less, was the axe he played at a critical juncture in his career, amid the breakthrough of his 1984 album Purple Rain.

With its “love,” symbol on the neck, the guitar is “one of the most important … from the early years of Prince’s career ever to come to auction,” Julien’s Auctions said.

Nirvana’s acoustic performance during the taping for the popular MTV Unplugged series on Nov. 18, 1993, became what is considered one of history’s greatest live albums. It included renditions of Nirvana’s hits “About A Girl” and “Come As You Are” along with covers including David Bowie’s “The Man Who Sold the World.”

In October 2019 Cobain’s cigarette-singed cardigan worn during the “Unplugged” performance sold for $334,000. —REPORTS FROM AFP AND AP