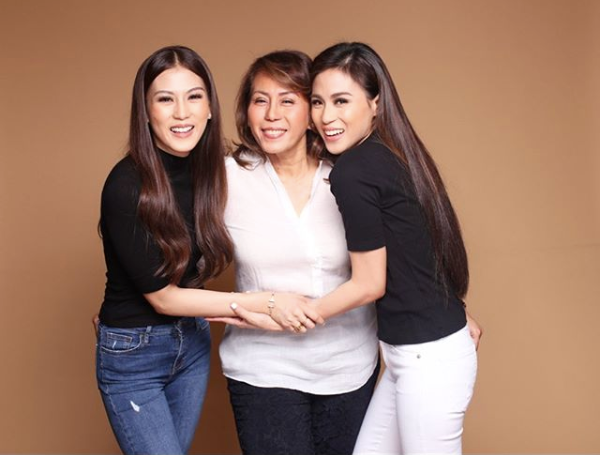 After some issues regarding Sarah Geronimo and Matteo Guidicelli’s intimate wedding were made known to the public, some celebrities and their mothers expressed their thoughts on the matter—but apparently Toni and Alex Gonzaga’s mother, Pinty, was not one of them.

A quote on parenting attributed to Pinty Gonzaga has circulated online amid the conflict between Sarah Geronimo and her Mommy Divine. Toni stressed via Instagram that Mommy Pinty has never expressed her opinion regarding the matter and urged others to be careful about what they share to stop aggravating the issue.

Geronimo and Gudicelli tied the knot at the Victory Church in Bonifacio Global City in Taguig, on Feb. 20. Guidicelli said that the evening was “almost perfect” until “some unexpected events took place.” Geronimo’s bodyguard filed a complaint claiming that Guidicelli punched him after informing Geronimo’s parents about their wedding. Meanwhile, Guidicelli denied “punching anyone” during the event.

Sarah’s mother, on the other hand, reportedly came to the wedding reception looking “ready to fight” after being unaware of the union. Divine allegedly started acting violently, even pushing Sarah during a scuffle, according to Sarah and Matteo’s relationship counselor, Letty Fuentes.

Toni’s mother reportedly spoke about not meddling with their children’s affairs especially if they are of the right age. A fan account of Pinty’s younger daughter Alex posted the quote on Instagram yesterday, Feb. 26 and clarified that it was a “fake” quote.

Toni also shared the fan page’s post on her Instagram Story yesterday, declaring “THIS IS FAKE.” The actress added that her mother was never interviewed by anyone.

“Mommy Pinty hasn’t given nor expressed her opinion regarding the matter,” she said. “These words never came out of her mouth, and neither did she release an official statement.”

The “Pinoy Big Brother” host also urged others to “practice responsible journalism” and be more careful about what they share to the public.

“Stop aggravating the issue by fabricating lies,” she stated. 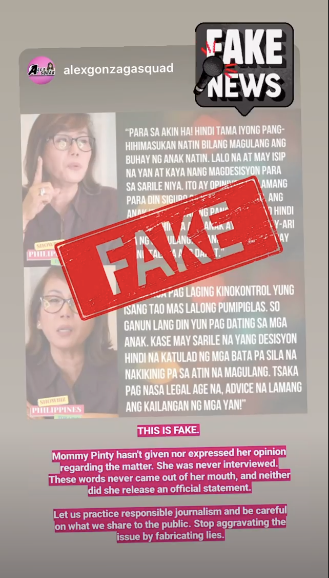 Last Saturday, Feb. 22, Mommy Pinty gave her take on stopping a wedding during the launch of Toni’s new fragrance line, Pouf!, made in collaboration with entrepreneur Winnie Wong.

Although the exchange did not mention Sarah and her mother, it seemed that Pinty was being asked about Alex Gonzaga and her fiance Mikee Morado’s soon-to-be wedding, as seen on Pinoy New Channel’s YouTube video on Feb. 22.

A woman asked Pinty: “Pipigilan mo yung kasal? Gaganon ka din? (Will you stop the wedding? Will you also do that?)”

A fellow celebrity mom, Carol Santos (Judy Ann’s mother) gave some advice to Sarah’s parents during an interview with Radyo Inquirer. When she was asked about her thoughts on the issue, Carol said that at the end of the day, as parents, their children’s happiness should be their main concern and priority.

([T]hink of your child’s happiness, not yours. You will soon leave the world. These children of yours have just begun their life so you should always wish them [the] best in what happens in their life.) NVG