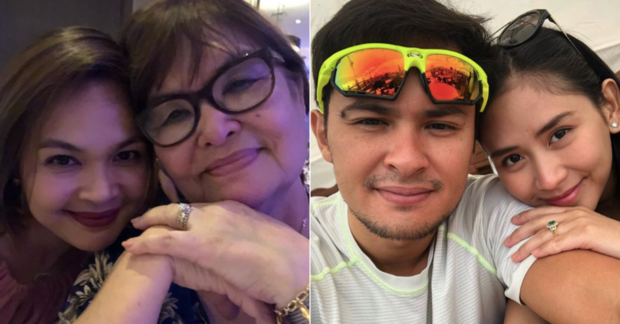 Carol Santos, Judy Ann Santos’s mother, has words of wisdom from one showbiz mom to another.

Carol, speaking to Radyo Inquirer on Saturday, Feb. 21, spoke up on the rift between Sarah Geronimo and her parents, Mommy Divine and dad Delfin, who were supposedly not included in her wedding to Matteo Guidicelli last week.

The wedding made headlines after Geronimo’s bodyguard claimed Guidicelli punched him after he informed Mommy Divine of Geronimo’s whereabouts.

In a phone interview on “Level Up Showbiz Saturdate,” Carol was asked by radio host Noel Ferrer about her thoughts on the issue. Judy Ann Santos and Geronimo have had a close bond through the years, especially after playing onscreen sisters in the 2010 film “Hating Kapatid.”

(You will soon leave the world. These children of yours have just begun so you always wish them [the] best in what happens in their life.)

“At matuwa ka na nandiyan ka pa, nakita mong masaya na ang anak mo (And be happy that you are still there, you have seen your child happy), right?” she said.

(Even if you do not like who your child is marrying, the mere fact that your child likes [that person], you cannot do anything.)

(Is it you who will be living with the future spouse? Let your child be. They will be happy.)

She concluded by stating that should there be trouble in the marriage, “[A]nak mo ang masisisi, at hindi ikaw (Your child will be responsible, not you).”

The newlyweds, known to fans as AshMatt, have yet to speak up on the matter. Guidicelli has denied punching the security aide.

After they announced their engagement last November, it seems Geronimo’s parents have not been receptive to it after Guidicelli posted an open letter to them on Facebook. He apologized for “hard feelings” and promised to “give Sarah a happy life with the best of my capabilities.” Niña V. Guno /ra