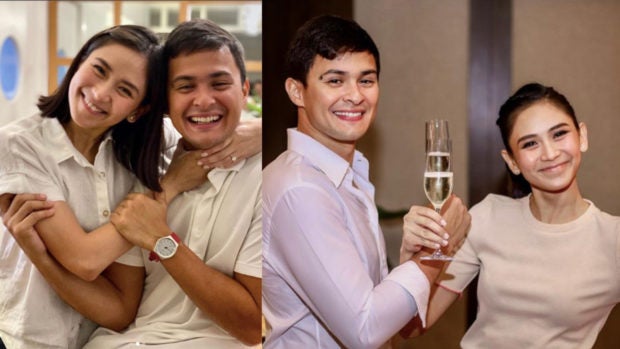 To set the record straight about celebrity couple Sarah Geronimo and Matteo Guidicelli’s private wedding, the newlyweds’ relationship counselor at their church, Letty Fuentes, narrated the details of the event.

Sarah and Matteo had a Christian wedding — not a civil one as was previously reported — which occurred last Thursday, Feb. 20 at around 6 p.m. at the Victory Church in Bonifacio Global City, Taguig.

The counselor also denied that Matteo punched anyone and claimed that Sarah’s mother, Divine, pushed Sarah and Fuentes during the reception, according to “TV Patrol’s” exclusive interview with Fuentes aired yesterday, Feb. 25.

Matteo’s family and some members of the church were present during their wedding. The couple was wed by the senior pastor of Victory Church, Pastor Paolo Punzalan.

Divine reportedly came into the reception and looked “ready for a fight.” According to Fuentes, Sarah’s mother yelled “traydor” (traitor) to the group after discovering the couple’s secret union.

Fuentes then showed a bruise she said she got from holding onto Sarah while the singer was stopping her mother during the event. According to the interview, Fuentes and Sarah were pushed to the ground, which left the singer shaking. The counselor also narrated how Divine looked like she wanted to slap Matteo during the confrontation.

When Fuentes looked back on her previous conversations with Divine, she revealed that Sarah’s mother was already expressing negative sentiments regarding the couple’s desire to get married.

“What will you do if the two pursue [marriage]?” Fuentes recalled asking Divine.

“Basta daw ‘di niya tatangapin ([Divine said,] regardless she will not allow it),” she said. “So she (Divine) was trying to sway me to advise her (Sarah) to stay off from him (Matteo).”

Despite the turn of events, Fuentes recounted how happy Matteo and Sarah were during the ceremony. Matteo was apparently crying, while Fuentes described the pop star as, “happy, parang nakawala (like she was set free).” The two were even joking while tying the knot, saying “Akin ka na (You’re mine)!” Fuentes remembered Matteo saying, “Finally she’s mine.”

The counselor said that the wedding pushed through because it was “God’s plan.” Fuentes also advised Sarah to forget about the scuffle that arose during the last few moments of their wedding day and to forgive her mother, Divine.

Matteo and Sarah broke their silence regarding the matter via the actor’s Instagram post today, Feb. 26. In their joint statement, the couple thanked their supporters for their love during the important milestone in their lives. Matteo also reiterated his claim that he did not punch anyone during that evening.

The couple declared, “We are happy, we are blessed, and we are husband and wife!” Cha Lino/NVG