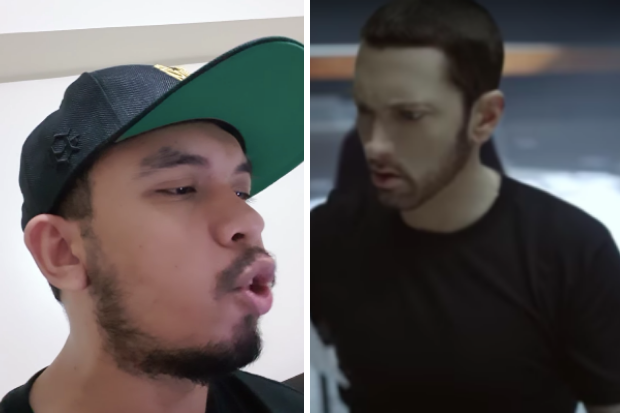 Fliptop star and Filipino rap icon Loonie (real name: Marlon Peroramas) has rattled the internet once again—not through a rap battle but by flawlessly spitting out the insanely fast bars of Eminem’s #GodzillaChallenge.

The “Hari ng Tugma” took on the challenge to rap the last 31 seconds of the third verse of “Godzilla,” which contains 224 words and 330 total syllables, or an astonishing 10.65 syllables or 7.23 words per second, music website Genius reported. The track features the late rapper Juice WRLD and is part of Eminem’s latest album, “Music to Be Murdered by.”

Loonie’s take on the challenge came right after Eminem called on his fans to try and match his flow for the famous rap verse.

“#GodzillaChallenge is on. Who can spit it? Reposting + got prizes for my favorites,” Eminem said via Instagram yesterday, Feb. 26.

“Fill ‘em with the venom and eliminate ‘em” @trillervids #GodzillaChallenge is on. Who can spit it? Reposting + got prizes for my favorites. Link in bio

Eminem has not yet announced his personal picks, but Loonie seems to be already winning as his sister and manager, Idyll Liza Peroramas, shared that he has garnered international attention for the video.

“I immediately knew Loonie was up to something late last night when I woke up to Google Alerts and emails from international media requesting for interview,” she said on Facebook earlier today.

“His take on Eminem’s #GodzillaChallenge…almost a half million views in just 7 hours!” she added.

Loonie made his first public appearance early this month during the FlipTop Festival, days after being released from jail in late January.  /ra