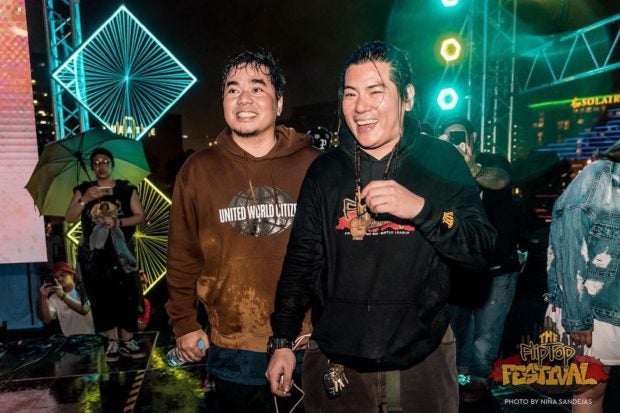 Before the country’s biggest hip-hop festival was conceived – and even before FlipTop was even formed – Alaric Yuson, popularly known as Anygma, was once just a kid listening to his idol, the veteran rapper Gloc-9.

Gloc-9 (real name: Aristotle Pollisco) performed at the recently-concluded FlipTop Festival 2020, and Anygma, one of the three founders of the FlipTop Battle League, expressed gratitude to his idol.

(Most of the things I do, I do for Pinoy hip-hop; and one of the main reasons is to give justice to those who came before me. To those who introduced, gave color and made magical this world that I would not dare leave.)

Anygma, who had been working toward the festival for a decade, noted that it would just be a “bonus” if he makes Pinoy hip-hop veterans proud or happy with his contributions.

(And so that the cycle continues, I hope my contribution will also serve as inspiration for those who will come after me, just like how sir Gloc inspired and passed on the passion to kids like me, who dreamt, and are still dreaming.)

“Maraming salamat po ulit sa tiwala at pagkakataon [sir]! ( Thank you so much for the trust and the opportunity, sir!),” he added.

Anygma’s message of gratitude came after Gloc-9’s Facebook post on Feb. 9, where the veteran rapper-songwriter recognized the FlipTop founder’s achievements on the local hip-hop scene.

(Sometimes even when you do not work closely with someone or even if you do not personally know them, there are times that despite that, you both know that you respect each other greatly.)

The FlipTop Festival was a two-day event held from Feb. 7 to Feb. 8  at the Aseana City Concert Grounds in Parañaque to mark the battle rap league’s 10th anniversary. The event, dubbed as “the biggest hip-hop festival in the Philippines”, was attended by over 200 artists, including FlipTop stars such as Loonie, BLKD, Apekz, Zaito and Abra. NVG