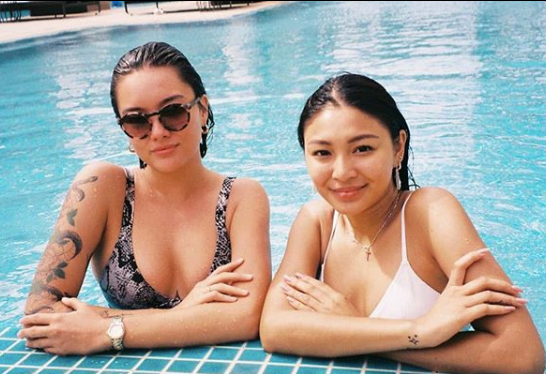 After actors James Reid and Nadine Lustre officially confirmed their split as a couple, James’s sister, model Lauren, seems to be reaffirming her friendship with Lustre by posting pictures of them spending time together.

James and Lustre, better known as JaDine, kicked off their romance as a television love team before confirming their romantic relationship in 2016. The two issued a joined statement announcing their breakup on “Tonight with Boy Abunda” last Monday, Jan. 20.

The confirmation came weeks after speculations about their separation circulated, stringing along a couple of issues regarding the cause of their breakup, such as Lustre’s mental health problems.

“It’s true that we have split up but not for all the [reasons] that are being spread on the tabloids and social media,” JaDine stated. “[A]fter quiet and mature conversations, we decided to focus on ourselves.”

A day after the statement was aired, Lauren posted a couple of photos with Lustre.

Lustre and Lauren bonded by the pool while James’s sister was sunbathing. The two also enjoyed taking a dip in the pool while rocking their accessories and swimsuits.

Days before the New Year, Lustre and Lauren were also spotted having dinner. The girlfriends were dressed in casual clothing with each holding up their glass of red wine, as seen on Lauren’s post on Dec. 27.

Lauren made a cheerful face while Lustre gave out a smile. Lauren said: “Date night with Lady Lust.”

Meanwhile, despite confirming their split as a couple, Lustre and James said they will continue working together.

“We are in good terms and are still really good friends and will continue to work with each other especially when it comes to music,” they said in their statement.

Lustre and James are both signed under his record label, Careless Music Manila. NVG

‘On the Wings of Love forever’: JaDine breakup stirs up emotions of fellow celebs and celeb fans