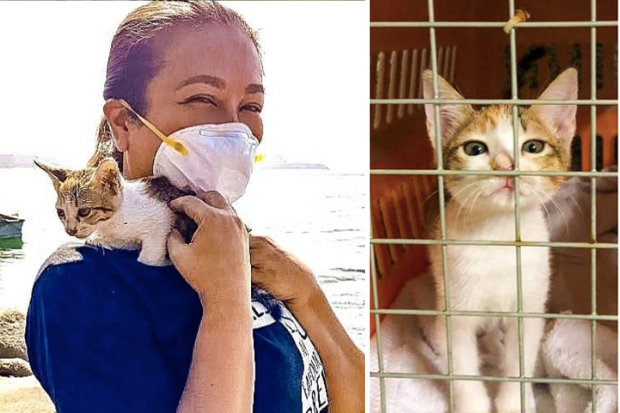 Efforts continue to pour in to save both affected humans and animals following warnings of a looming hazardous explosive eruption from Taal Volcano. As many of the pets and animals were left behind during the evacuation, celebrities have also taken action to save humanity’s companions and share their tales of rescues.

Korina Sanchez, an animal welfare advocate, shared the good news that more and more animals are being rescued from danger zones and taken to “shelters volunteered and run by heroes,” as per her Instagram post last Sunday, Jan. 19.

“The work continues. Parang nakikipaghabulan sa bulkan ang rescuers (it is like the rescuers are trying to outrun the volcano),” she stressed. “We are still praying this eruption never happens.”

“People call us to find their homes and take in their animals,” she added.

Accompanying Sanchez’s message is a collage of her team doing the animal rescue operations, showing the volunteers in action helping several dogs.

In another post, Sanchez talked about the heartwarming story of a rescued kitten they aptly named “Taal” who is now living in a new home in Makati after being adopted by celebrated chef Margarita Fores — the cousin of Sanchez’s husband Mar Roxas.

“We found this almost newly born kitten during our animal rescue mission around the volcano, days ago,” Sanchez said on Instagram yesterday, Jan. 21. “We named her Taal. On the way home she could only sleep perched on my shoulder near my neck. So sweet.”

“The work continues in saving the animals in Batangas, racing against what authorities keep saying is an imminent eruption,” she added.

While doing her job as a “Rated K” host by covering the calamity, Sanchez has been lending a hand in animal rescue operations since Taal’s phreatic or steam-driven eruption on Jan. 12.

For those who want to help, Sanchez said people can contact her through [email protected], saying they “can be your hand of help to the affected humans and animals.”

Actress Carla Abellana also has her own tales of animal rescue, revealing that 48 horses are now safe and being taken care of in a temporary shelter in Lipa, Batangas, among other rescued animals.

“It feels so good to be able to see that these horses are safe, far away from volcano island and slowly recovering,” she posted on Instagram last Monday, Jan. 2o.

Abellana can be seen petting a rescued horse in the short clip that she posted. She is currently working with PAWS Philippines in the rescue operations.

“The worst burn cases were brought here and it was so painful seeing the burns all over their faces and bodies,” the actress lamented.

She added that the horses are having a hard time breathing as well due to the inhalation ash spewed by the volcano. However, despite the trauma, Abellana believes that the horses “will get there eventually.”

“I am extremely glad to meet them personally,” she noted. “There’s nothing more rewarding than getting to feed them, talk to them and touch them to let them feel that it’s gonna be alright.”

“I hope and pray more animals will be EVACUATED from Batangas. Because we don’t want to lose any more precious lives should Taal Volcano fully erupt,” she added.

In a recent report, however, it was revealed that some of the horses that survived the calamity may end up in slaughterhouses as butchers are trying to buy off the animals for their meat.

They are reportedly offering P15,000 to P30,000 for each horse to the owners, most of whom are from poor families. Of the 55 horses rescued and taken to a shelter in Kalawit, Cavite, nine have been already sold, according to volunteer veterinarian Jay Tolentino.

According to the Philippine Institute of Volcanology and Seismology, Alert Level 4 remains placed over Taal Volcano, meaning a hazardous explosive eruption is possible within hours to days. NVG