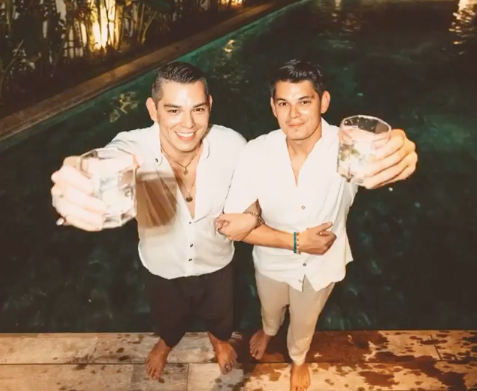 After celebrating their birthday in different parts of the world last year, celebrity twins Richard and Raymond Gutierrez marked their 36th birthday together today in Indonesia. The two welcomed their special day in a luxury villa in Bali with some family members.

Richard and Raymond donned matching white button-down shirts as they toasted to mark the occasion before submerging in the villa’s swimming pool. The two posted the Boomerang video on their respective Instagram accounts today, Jan. 21.

Richard also enjoyed the getaway with his bride-to-be Sarah Lahbati. The two basked in the sun while kissing in the pool.

“Thanks my love for organizing this birthday trip,” he said on his post yesterday, Jan. 20.

Raymond, on the other hand, appears to be flying solo while also taking a dip in the pool.

“Celebrating all week in paradise,” Raymond announced on the same day.

Lahbati and Richard’s youngest son, Kai, also seems to be having fun on the trip. The baby boy was all smiles while playing with his shirt, as seen in Lahbati’s snapshots via Instagram on Jan. 20.

Lahbati reunited the twins this year after the two celebrated it apart last 2019. On their 35th birthday, Richard was off diving in Coron, Palawan while Raymond was in Las Vegas, Nevada, United States, watching boxer Manny Pacquiao’s match against American boxer Adrien Broner. NVG