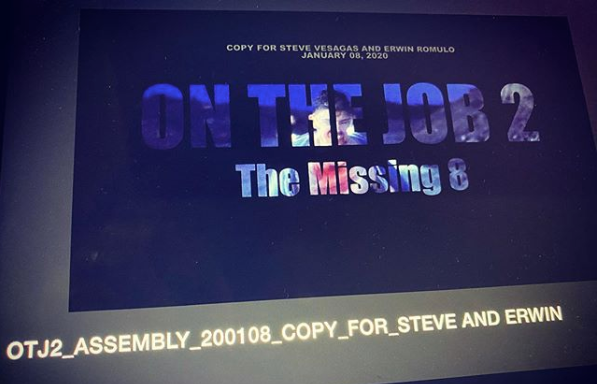 “On the Job: The Missing 8” in the works. Image: Instagram/@runsteverun.oh

The sequel of director Erik Matti’s critically-acclaimed 2013 hit “On the Job” has a much-awaited follow-up.

Matti shared producer Steve Vesagas’ sneak peek into what appears to be the sequel’s production process, which the latter posted on Instagram last Sunday, Jan. 19.

The snippet shows a title card, dated Jan. 8, 2020, of the much-awaited sequel called “On the Job: The Missing 8”. It was labeled as a copy for Vesagas and film composer Erwin Romulo, who was also part of the first film.

Audio post-production house Hit Productions and film composer Malek Lopez, who worked in Matti’s 2018 action-thriller “BuyBust”, appear to also be involved in the sequel’s production as they were tagged in the post.

Although Matti has yet to announce a release date, “On the Job: The Missing 8” may be close to completion as the director said in an Instagram post on Dec. 19 that they were only “five days away from finally completing this epic.”

“This might turn out to be my longest film ever both in production length and in running time,” Matti said. “But with a script as compelling as @michikuda’s (Yamamoto’s), I think it’s all gonna be worth it.”

In the same post, Matti opened up about his struggles on the making of the sequel, as well as filmmaking in general, which includes not being able to eat or sleep well, and not being able to function properly as a director due to “paranoia and anxiety.”

In the end, however, he said he is fortunate for having been able to mold a team that can “collaborate more and understand the creative process for our movies.”

Matti originally planned to create an “On the Job” online series as a follow-up to the first film, but then decided to make a full-length sequel instead. “On the Job 2” was first set to be released in June 2019, and was supposed to be followed by a five-part series. For undisclosed reasons, the plans were postponed.

Matti previously gave fans a peek of a few seconds of the sequel last September 2019, which showed a bloodied Cruz running away from someone.

Matti’s first “On the Job” film follows the tale of two prisoners, Tatang (Torre) and Daniel (Gerald Anderson), who were hired by corrupt politicians to do their killing for them. NVG