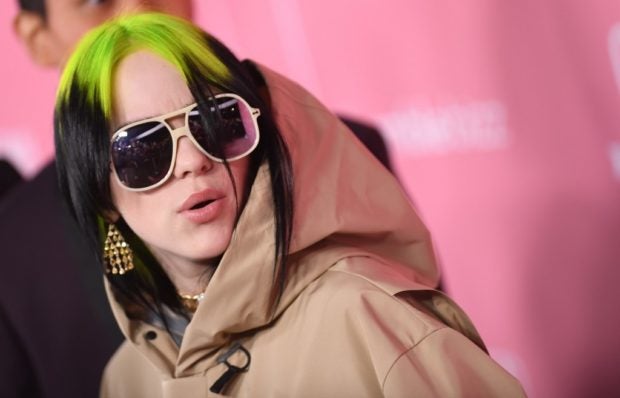 Billie Eilish arriving at Billboard’s 2019 Woman of the Year at the Hollywood Palladium in Los Angeles. Image: AFP/Valerie Macon via AFP Relaxnews

While her brother Finneas revealed back in October that the pair were already working on the sequel to “When We All Fall Asleep, Where Do We Go?”, Eilish announced that she will not release her sophomore album in the coming months.

“This year, no, but I will be making it this year. But next few years? It’s coming. When it’s made. It’s not made yet,” she explained on the red carpet at iHeartRadio’s ALTer EGO concert, where she performed alongside Coldplay, the Black Keys and Blink-182.

The 18-year-old phenomenon also hinted at her forthcoming yet-untitled documentary, which will be directed by Peabody Award-winner R.J. Cutler for Apple TV+.

“I’ve seen no part of it. I’m terrified. I’m freaked out. They’ve been filming since like July of 2018 … Who has that much footage of them that they’ve never seen? I’m terrified,” Eilish revealed.

Details about the documentary are still scarce to this date, although the film will reportedly follow the singer-songwriter in the wake of the release of her debut album.

For the project, Cutler was notably granted access to Eilish’s moments with her family as well as behind-the-scenes of her public appearances.

In addition to starring in her first documentary, Eilish is recording the theme song for the upcoming 25th James Bond film “No Time to Die”.

“It feels crazy to be a part of this in every way. To be able to score the theme song to a film that is part of such a legendary series is a huge honor. James Bond is the coolest film franchise ever to exist. I’m still in shock,” the vocalist said in a statement, without sharing additional details about the song she wrote with her brother Finneas.

As pointed out on the official James Bond Twitter account, Eilish is the youngest artist in history to write a theme song for the franchise.

The #NoTimeToDie title song will be performed by @billieeilish. Billie has written the song with her brother @finneas and is the youngest artist in history to write and record a James Bond theme song. pic.twitter.com/Qd5cYIRlmg

Oscar-winning composer Hans Zimmer has taken the reins of the score for “No Time to Die”, replacing “Beasts of No Nation” composer Dan Romer, who had been previously set for the position.

On Jan. 26, Eilish will also make her debut on the Grammys stage, while other performers set for the event include Lizzo, Gwen Stefani, Blake Shelton and Aerosmith.

The “bury a friend” sensation is one of the top-nominated artists at this year’s awards gala, in which she is notably competing for the prestigious Album of the Year prize. IB/NVG