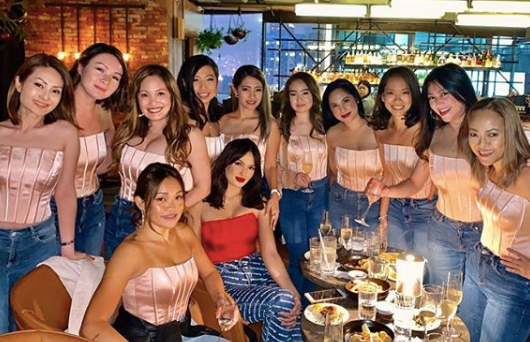 Actress Sarah Lahbati is going through all the traditional pre-wedding stops before becoming Mrs. Gutierrez. After welcoming the year with her first bridal shower, she and some of her girlfriends jetted off to Hong Kong for her bachelorette party over the weekend.

Actor Richard Gutierrez’s soon-to-be-bride thanked her best girls for the memorable trip. During the party, Lahbati donned a bright red corset, while her guests wore matching tops in a pinkish hue, as seen on her Instagram post yesterday, Jan. 15.

Lahbati said she and her guests got stranded while in Hong Kong. Among them was comedienne Rufa Mae Quinto who stated that their flight was delayed due to the explosion of Taal Volcano last Sunday. Lahbati chose to see the challenge they experienced as a way to bring her closer to her girlfriends.

“Through thick and thin!” she said. “I love you all so much.”

While in Hong Kong, the girls wore matching pink silk pajamas personalized with each guest’s name on the pajama shirt’s breast pocket. The venue, on the other hand, was filled with wedding-themed decorations. Lahbati also wore a “bride to be” sash as per the pictures of one of her guests, Kitz Hoikka, on Instagram last Tuesday, Jan. 14.

Last week, Lahbati had a floral-themed bridal shower at a hotel in Alabang attended by some of Lahbati and Gutierrez’s closest family and friends. Some of the celebrities present were Coleen Garcia and Bela Padilla.

Lahbati also posed with her future mother-in-law Annabelle Rama. The actress used the hashtag #BecomingMrsGutz on her post on Jan. 8.

Lahbati is about to tie the knot with Gutierrez after being engaged in 2017. Gutierrez announced October last year that their wedding ceremony will take place this March in Manila. NVG