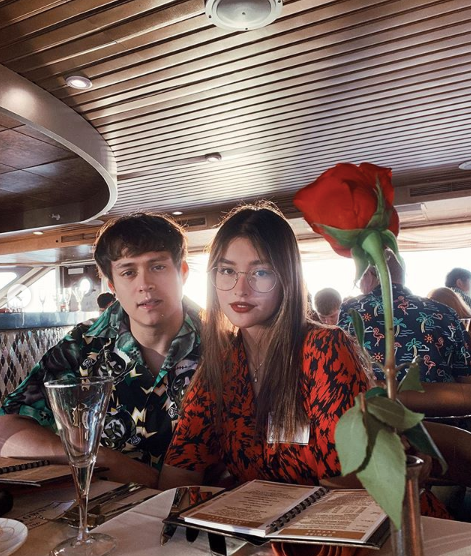 Liza Soberano and Enrique Gil denied that they were engaged and the actress was pregnant when she made a trip to the US last year.

The real-life and on-screen couple shut down those rumors during their appearance on “Tonight with Boy Abunda,” posted on the show’s YouTube channel yesterday, Jan. 15.

Boy Abunda said the artists’ fans began speculating that they were engaged upon seeing Gil wear a black ring in some of his photos, noting that others use the same ring to mark an engagement.

One netizen (@nalang_alma) uploaded the ring and the said pictures of Gil on Twitter on Jan. 8, prior to their guesting on the talk show.

However, Soberano and Gil clarified that the ring does not hold any particular meaning for them. The actress also pointed out that it was given to Gil by a tito (uncle) of theirs in Vancouver, Canada.

The TV host then mentioned the pregnancy rumors that surrounded Soberano’s trip to the US last year. At the time, she was in the US to undergo surgery for her finger that was injured while filming for “Bagani.”

When Abunda asked her if she was angry over the rumors, Soberano first admitted that she expected the speculations since she would be away for a long time. However, she explained that she was not upset about the false stories.

Instead, Soberano was “more upset” with the person who started the speculations and made a video about her supposed pregnancy. She did not name the person she was referring to.

The actress also noted that the video never mentioned her name, but that “it [was] so obvious that they were talking about [me].”

She added that the said person did not bother to ask her or her manager about the rumors first. After the video was released, Soberano’s fans advised her to sue the person responsible for it. Despite their urging, she chose not to take legal action against the individual.

“I am not ruining someone’s life just because they decided to make a silly rumor about me,” Soberano said. “I think it’s bad enough already that he got a taste of his own medicine and everyone got mad at him.”

The actress also emphasized that going abroad does not necesssily mean one is already bearing a child.

“I don’t think everyone who gets pregnant wants to hide it,” she added.

Abunda then stressed that “nobody has the license to inflict pain on others no matter how public [their] jobs are.”

Soberano and Gil currently star opposite each other in the recently released TV drama series “Make It with You.”  /ra

LOOK: Liza Soberano back to school to continue pursuing degree in psychology