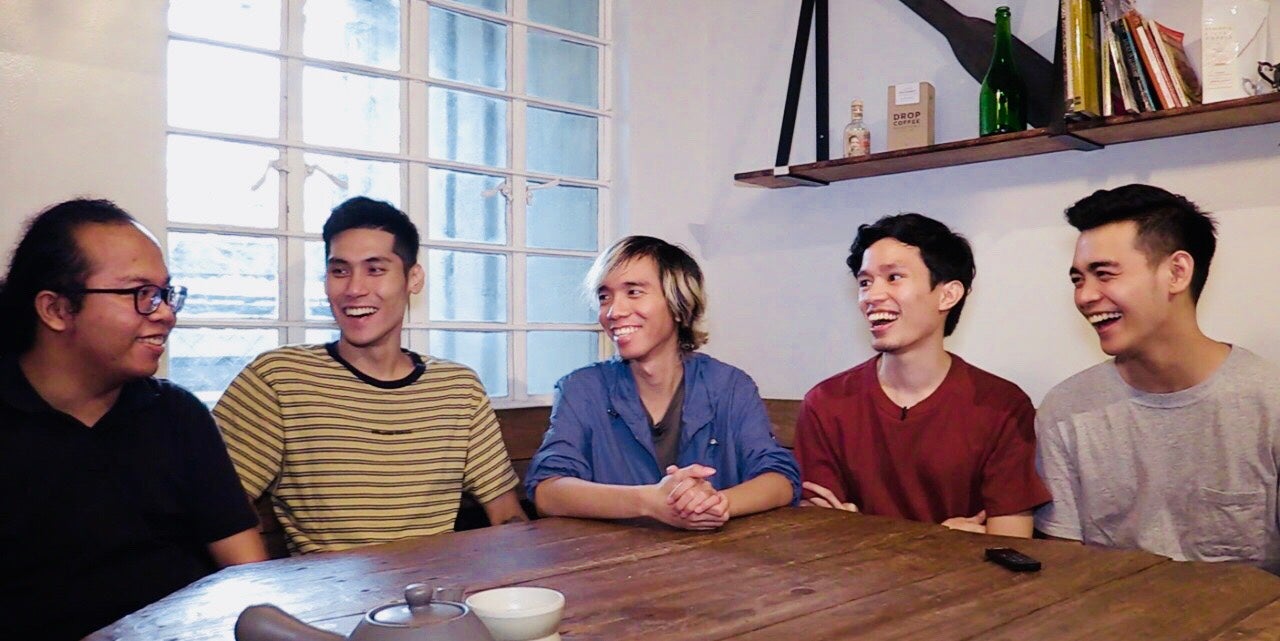 (From left to right) Munimuni band members Owen, Jolo, TJ, Adj, and Josh share the stories behind some of their songs in an interview with INQUIRER.net. INQUIRER.net photo / Ryan Leagogo

MANILA, Philippines – If you’re into a calming, folk sound beautifully incorporated with deep, poetic lyrics of love and hope, local band Munimuni might just end up being your top choice in music streaming platforms.

Original members of the band, Adj, TJ, and former Munimuni’s drummer Red Calayan, met in a Christian youth ministry at the University of the Philippines (UP) before starting the band in 2013. Years later, with Red exiting the group, other members who were also from the same youth organization joined Adj and TJ.

TJ shared how worship music influences the kind of sound and message entailed in their songs.

(The sound of the group Hillsong or church music in general, including hymns, influences our sound musically and lyrically. The influence of the theme about hope, which is always the topic in church and in the Bible, is also apparent in our music.)

TJ said the band did not intentionally decide on a unified theme for all their songs, but most of their releases automatically had this message because hope is “something that flows within” them as individuals.

“I guess relevant ‘yung message na ‘yun, ‘yung [that message is relevant, that] hope message for this generation,” TJ explained, adding that a lot of young adults and teenagers go through difficulties in life.

Adj had the same view, saying that the profound lyrics of their songs are fueled by their own experiences or those of other people around them.

“We believe in hope, so siguro [maybe] what else do you write about other than things you experience and you believe? Doon nanggagaling ‘yun [That’s where the lyrics come from],” Adj said.

So far, Munimuni’s songs are purely Filipino, but even this, said Adj, was not intentional. He said the songs they have released so far were picked to be part of their “Simula” extended play (EP) in 2017 and first full-length album “Kulayan Natin” last year since it is related to each other and form a unified story together. He revealed they have written some English songs but these have not been released.

Here are the stories behind some of Munimuni’s best songs that will lift up your spirit whenever it feels weary, as told by the composers themselves:

If you cried by just hearing the first line of this comforting song, Owen says to do so is perfectly fine.

(That’s nice, because that’s the goal of the song, to release all your tears. So if there are tears still left inside, you should let it out. Crying on that first line is okay because it means the tears will soon run out.)

Accompanied by gentle plucks on guitar strings and light beats, “Tahanan” is a song about someone assuring a person experiencing difficulties that he will stay no matter what life brings.

Owen wrote the song before he was diagnosed with bipolar II disorder.

(There was a phase in my life when I was feeling so sad, then there was a day when I was so happy, so I said I will write a song, so I wrote a song. That’s basically how the song was written.)

Owen’s style of composing seems to be different, as he prefers to write songs that continue the story of the previous piece he penned.

He described “Pagsibol” as the “child” of two other songs: “Tahanan” and an unreleased song titled “Alpas.”

If “Tahanan” is about someone assuring a person that he will be with him amidst trials, and “Alpas” is about the latter slowly believing that there’s hope, “Pagsibol” tells of that same person who finally realizes that the only way for his life to flourish is to be with that someone who comforts him in “Tahanan,” according to Owen.

“Marilag,” as emphasized by its bridge, is evidently a song about rising again, similar to how the sun rises everyday and sheds light after a long, cold night.

Adj said he and TJ wrote “Marilag” after a night at UP Fair years ago.

(We had an overnight with a group of friends at TJ’s house. They were all asleep but the two of us were still up and we saw the sunrise. That was the starting point. [We said,] “Let’s write a song.” In a span of 30 minutes, when the horizon did not have much color yet until the sun rose, that’s when we wrote the song. Sunrise for us is a metaphor of hope.)

“Kakalimutan na kita. Siguraduhin mong hindi talaga pwedeng tayo (I will forget you now. Make sure we can’t be together).”

Some say this song hurts listeners, but for TJ, “Sa Hindi Pag-alala” is more than about heartbreak, as it also urges people to do something after experiencing that pain. He even described it as a “decision song.”

“Marami kasing love song na puro heartbreak heartbreak lang, pero parang iba ‘yung song na ‘yun I guess [There are a lot of love songs that are purely about heartbreak, but I guess that song is different]. As the writer of the song, I would say iba siya [it’s different] in the sense na it wants you to do something besides wallow in your suffering.”

Moving on can also be associated with hope, and perhaps this relatable theme was one of the factors why “Sa Hindi Pag-alala” is currently the most popular song of Munimuni on Spotify.

According to TJ, the song was written based on his personal experience when he participated in a student-exchange program in Japan in 2015.

“Basta sa UP ‘yun, may exchange program dun, sumali ako, tapos ayun maraming nangyaring ibang bagay [I joined an exchange program in UP, and then a lot of other things happened],” TJ laughingly recounted.

TJ traced the inspiration behind the song Kalachuchi during his days at UP. He was walking with a “special person” inside the university premises sometime in May years ago, talking about the latter’s problem, when that person saw Kalachuci flowers blossoming inside the UP grounds.

When he went home, he researched about that flower and found that it blossoms the most when the season was hottest.

Imagine a scene in a movie where the only colors present are black and white, with two people walking on a road and together “paint” the surroundings.

That was exactly what Adj was thinking of when he wrote “Kulayan Natin,” also the title of their 2019 album.

(Those two persons walking in that movie scene paint colors to the world. That’s a more active kind of love because it overflows to the society they are in.) “Darating ang araw na kakalimutan din natin ang lahat (A day will come when we will forget all these).”

“Simula,” the first song in the “Kulayan Natin” album, was written when TJ was only 18 years old and his family was facing a problem.

Introduced by a cinematic sound from Owen’s flute, it speaks about the hope that we will one day laugh at the situations that currently bring us down.

(There will be a time when we will forget or laugh at these problems we face as a family. That’s the inspiration of the song, that attitude of hope that one day, everything will be gone, or even if it does not end, there will be better days.)

“Ako ang banaag sa dulo ng lahat (I am the light at the end of it all).”

“Banaag” was created out of TJ’s curiosity on a thick Filipino dictionary he found in Adj’s apartment.

TJ was browsing the dictionary when he discovered the word “banaag,” which means a light flickering from afar.

(I imagine that I am a pilgrim and the land I am walking through is so dark, but there is a small light and that light alone will guide me where I am heading.)

Year 2019 was a year of breakthrough for Munimuni as it marked the release of their album and “Kulayan Natin” concert. TJ said they are thankful to have reached these milestones as a full-time band even though they are operating in a challenging industry.

As for their plans for 2020, Adj said they will write more songs and attend more gigs. They added they also look forward to releasing another album but are not sure about when it can be released.

Following the success of their concert, will Munimuni hold another one this year?