Derek Ramsay did not mince his words when he addressed a netizen who warned Andrea Torres about being in a relationship with him, citing that he “never settles down.”

The netizen, one @lermzmd on Instagram, made the remark after Ramsay shared a picture of a sweet kiss with Torres on his own page yesterday, Oct. 15.

Many of the actor’s followers expressed their joy for the couple and wished them well, but @lermzmd chose to criticize their relationship instead.

The Instagram user, addressing Torres, said, “[You are] just one of them. If [you] noticed he never settles down.”

“He will be single forever until he gets old,” the netizen added. “And he will get every woman he wants.”

The Instagram user also noted that she “used to admire” Ramsay.

Other fans of Ramsay disagreed with the netizen’s sentiments. One @_jmannelove advised the netizen to simply unfollow Ramsay or deactivate their account if they have nothing nice to say. 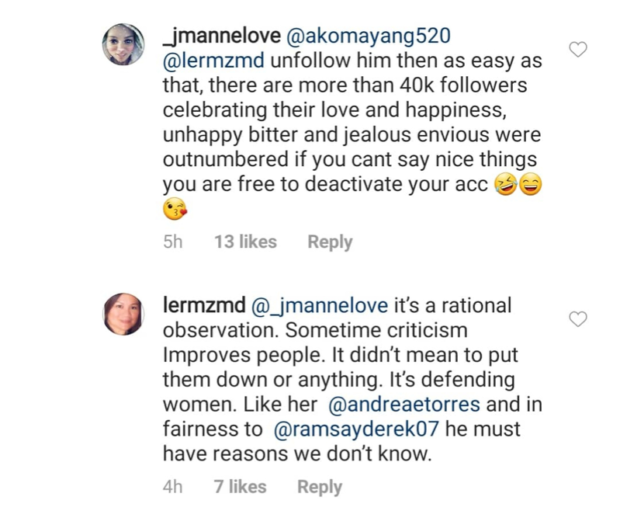 The netizen then explained that her remark was a “rational observation.” She added that what she had said did not mean to bring Ramsay and Torres down. Instead, she called it as a means of “defending women” like Torres.

Ramsay later responded to @lermzmd, and said, “[Ma’am] you talk like you know what happened in my relationships. [I’ve] been in only a few relationships that lasted many years.”

“[It’s] sad that they ended but you seem to put all the [blame] on me,” he added. “Learn to give respect and never assume.” 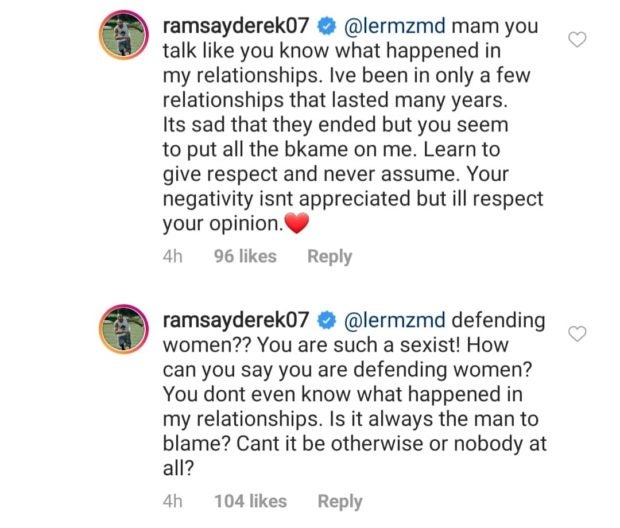 Immediately after, Ramsay addressed the netizen’s remark in which she claimed to be “defending women.”

“You [don’t] even know what happened in my relationships,” he said. “Is it always the man to blame? [Can’t] it be otherwise or nobody at all?”

Meanwhile, in another Instagram post, a certain @stray_cat123 claimed that there was truth to the rumors that Torres was the reason behind Ramsay’s split with his ex-girlfriend Joanne Villablanca.

Ramsay ended speculations surrounding him and Torres last month after revealing that they are “more than friends.” The two were previously co-stars in the TV drama “The Better Woman”. NVG