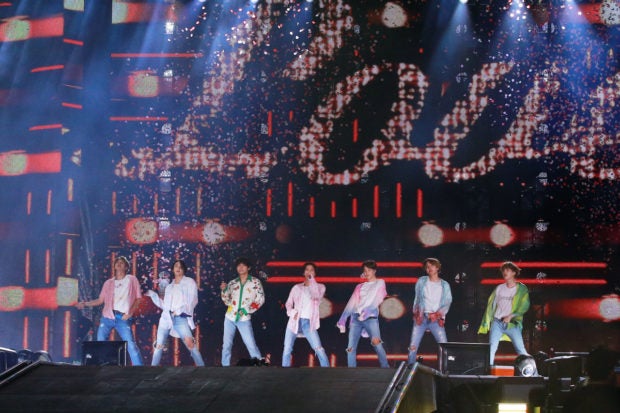 The K-pop group BTS will be broadcasting one of their upcoming stadium shows in Seoul, South Korea, live in cinemas.

The concert film will be screened simultaneously in cinemas across various Asian countries including Singapore, Thailand, Taiwan, Hong Kong and Japan. The performance will also be broadcast across the US, but with some time delay due to time-zone difference.

“Love Yourself: Speak Yourself [The Final]” will mark BTS’ fourth concert film, following their 2018 “Burn the Stage: The Movie” as well as their 2019 “Love Yourself in Seoul” and “Bring the Soul: The Movie.”

The seven-member boy band recently made headlines after performing a controversial concert at Riyadh’s King Fahd International Stadium earlier this month, as part of their “Love Yourself: Speak Yourself” tour.

As the Guardian pointed out, the South Korean group were the first non-Arabic artists to perform in a Saudi Arabian stadium.

Despite appeals by human rights groups and their own fans, BTS defended the decision to perform in the controversy, stating, “We go where people want to see us.”

Fathom Events called the concert film “[a] momentous event [that] will unite fans around the globe in celebrating the group’s most loved hits and unprecedented international fame.”

This is not the first time that BTS and Fathom Events collaborated. Earlier this year, the K-pop sensations screened “Love Yourself in Seoul” on Jan. 26 in select cinemas across the world, attracting over a million admissions.

According to Big Hit Entertainment, the film grossed over $11 million (P517 billion) worldwide and had the “biggest worldwide one-day box office ever for a cinema event.” CL/ra