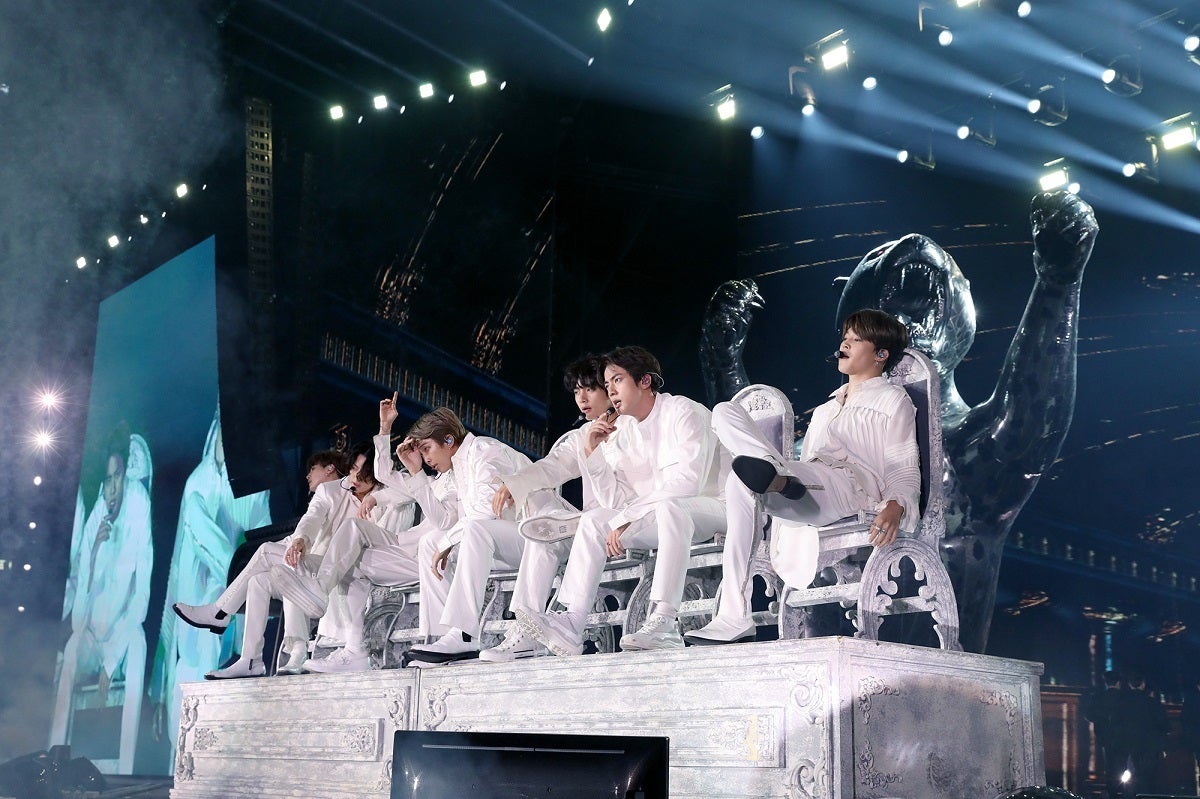 RIYADH – For BTS and the 30,000 screaming Arab fans who filled King Fahd International Stadium in Riyadh, Saudi Arabia, on Friday evening, it was a night to remember.

“We’d never thought we would perform here. Thanks to all the people, to all the ARMYs (BTS’ fandom) who made this possible. There is a beautiful full moon up in the sky. Remind of us, remind of tonight,” band leader RM called out to the crowd.
Indeed, BTS’ Saudi Arabian leg of its ongoing “Love Yourself: Speak Yourself” world tour was a new experience for the group.

While BTS is no stranger to stadia, given its past concerts in London’s Wembley Stadium and California’s Rose Bowl Stadium, the K-pop juggernaut’s performance in the ultra-conservative kingdom has been veiled in mystery, with questions about how it might differ from the act’s previous shows.

As expected, the weather was extremely dry and hot. Female fans were mostly shrouded in abaya, a body-covering black dress that Saudi women wear in public, and Azan, the Islamic call to prayer, went on and off around the stadium prior to the event. It was all quite different from your typical buildup to a K-pop concert.

But other things seemed more familiar: some 100 fans greeting the act at the airport, the ear-shattering screams, enthusiastic singalongs and thousands of dazzling ARMY bomb light sticks at the venue, all of which were a sign to how much fans here have waited for the K-pop phenomenon to come.

Signaling the start of the nearly three-hour set was the electrifying first note of party anthem “Dionysus” that blared through the stadium. Fireworks followed, and as two gigantic silver-metallic panthers that had been guarding the stage slowly rose the seven polished men of BTS appeared behind them.

Back from their headline-making five-week vacation, the group’s stage presence was a spectacle. In front of a backdrop of Roman pillars, the singers ruled the stage with nonstop energy, jumping from chair to chair and showcasing their tight performance atop a Last Supper-inspired marble table that moved around the stage.

After ending their lung-busting first song, BTS immediately launched into another pulsating banger, “Not Today,” with the same level of energy. 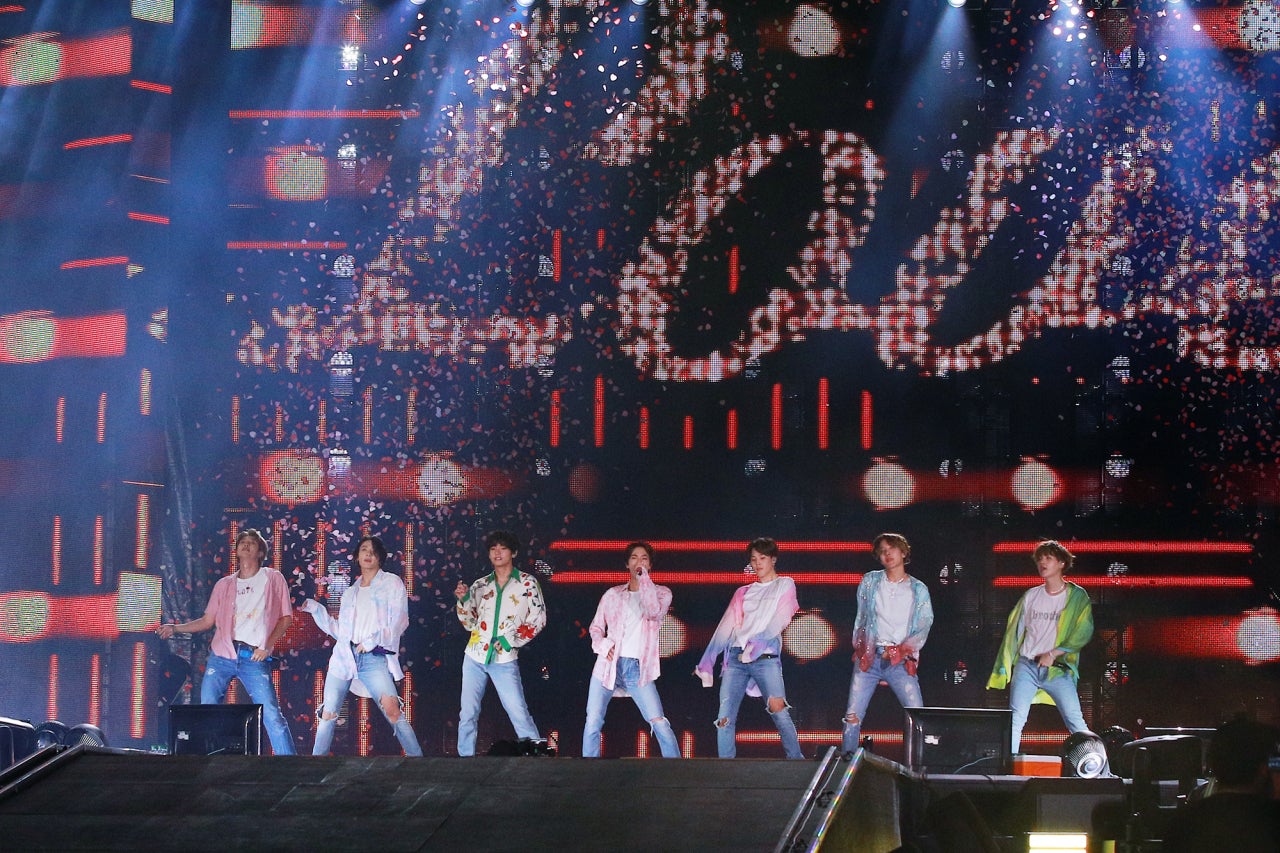 BTS performs to their mega-hit song “Boy With Luv” at the concert. Big Hit Entertainment via The Korea Herald/Asia News Network

Moments later, the members finally took a close look at their adoring fans, who responded with such volume that nearly rattled the venue with capacity of almost 70,000.

“Hello, we are BTS. Welcome to BTS World Tour: Love Yourself, Speak Yourself, in Riyadh, Saudi Arabia!” exclaimed RM to the exhilarated crowd. Other members followed suit, with Jimin shouting out, “We’re finally having a stadium tour here,” and Jin belting out, “Unbelievable. Riyadh, can you hear me?”

In an attempt to connect with fans in their mother tongue, V said, “Look at this! BTS and ARMY, we made this. Ahbak (‘I love you’ in Arabic). You made this concert. Thank you ARMYs.”

It was a truly surreal moment. In the lead-up to the concert, BTS’ decision to play in the kingdom had sparked controversies as a result of Saudi Arabia’s poor human rights record, all the more after other international artists faced criticism for performing in the country in recent months.

Women have only been allowed to enter King Fahd Stadium since 2017. And both the band and its fans seemed to weigh on the significance of their long-awaited encounter.

“We know that you always give us so much love and support even we live a thousand miles away. Tonight is the festival for ARMYs for sincerely waiting for us,” said RM.

Smoothly moving onto next song “Wings,” he announced, “Now it’s time to fly around the stadium!”

The rest of the show was an ebb and flow through BTS’ seven-year career. Running at full throttle, the band went onto serve up its quintessential hits like “Boy with Luv,” “Idol,” “Fake Love,” “MIC Drop,” “Dope,” “Baepsae,” and “Fire,” coupled with extravagant light displays, fireworks and explosive energy.

Audience members, regardless of gender or age, staff and even security personnel held up their cellphones to record the act’s head-turning performance, especially during the bombastic “Idol.” The Riyadh show also featured some slight modifications in consideration of local sentiment, such as “non-revealing outfits and the absence of choreographies that show the singers’ abdominal muscles,” according to an official from BTS’ agency Big Hit Entertainment.

Highlights included solo performances from each member. J-Hope rapped to “Just Dance” and Jungkook crooned while harnessed onto a zipline.

Jimin emerged from a plastic bubble-cocoon during his sensual “Serendipity,” RM boasted his leadership by making the crowd chant “sarang,” the Korean word for love, for his rap solo “Love,” while V’s mesmerizing “Singularity” began with the singer rising up from a suspended bed while wearing a wine-colored robe. Suga softened fans’ hearts with his mellow rap in “Seesaw,” while Jin did the remaining job of melting them with his emotional “Epiphany.”

The event also had a birthday surprise for Jimin, during which the members celebrated their bandmate’s birthday by singing a birthday song in Arabic.

“I had forgotten it was my birthday. Thank you for the wishes, and I’m so glad that I could celebrate with the fans and the members,” Jimin replied, jumping around the stage with joy.

As the show came to its close, the boys reunited on the stage to share their feelings. V went first.

“So many fans are here. I can’t believe that we could have filled this stadium. I hope to come back here again. I’ll go back home with happiness thanks to you guys. See you next time,” he said.

Suga picked up from him and said, “It’s our first time here in Saudi, and I was very surprised by how much you guys have enjoyed our show. Shall we come back again, like seriously?”

“As we’ve worked hard, we could have finally come to Saudi,” Jungkook added. “Tonight was a blast thanks to ARMYs. I hope you guys also felt happiness from this show. Please keep supporting and loving us.”

Jin drew out laughter by kindly yet jokingly requesting the event’s translator to “include their emotions to the translation,” and Jimin, with his eyes twinkling with potential tears, said, “Every moment has been a happiness. Today, we’ve once again realized that there are so many people who support us in this world. We won‘t forget to work harder to reciprocate. With all my heart, love you.”

J-Hope took his turn: “I missed this scream, this atmosphere. We’ve been very nervous, but also very happy to have finally met you in a long time. I’m your amal (‘hope’ in Arabic). Shukran!”

At RM’s orchestration, the venue lit up with a beautiful wave of cellphone lights. BTS wrapped up a memorable night with encore tracks “So What,” “Make it Right” and “Mikrokosmos.” 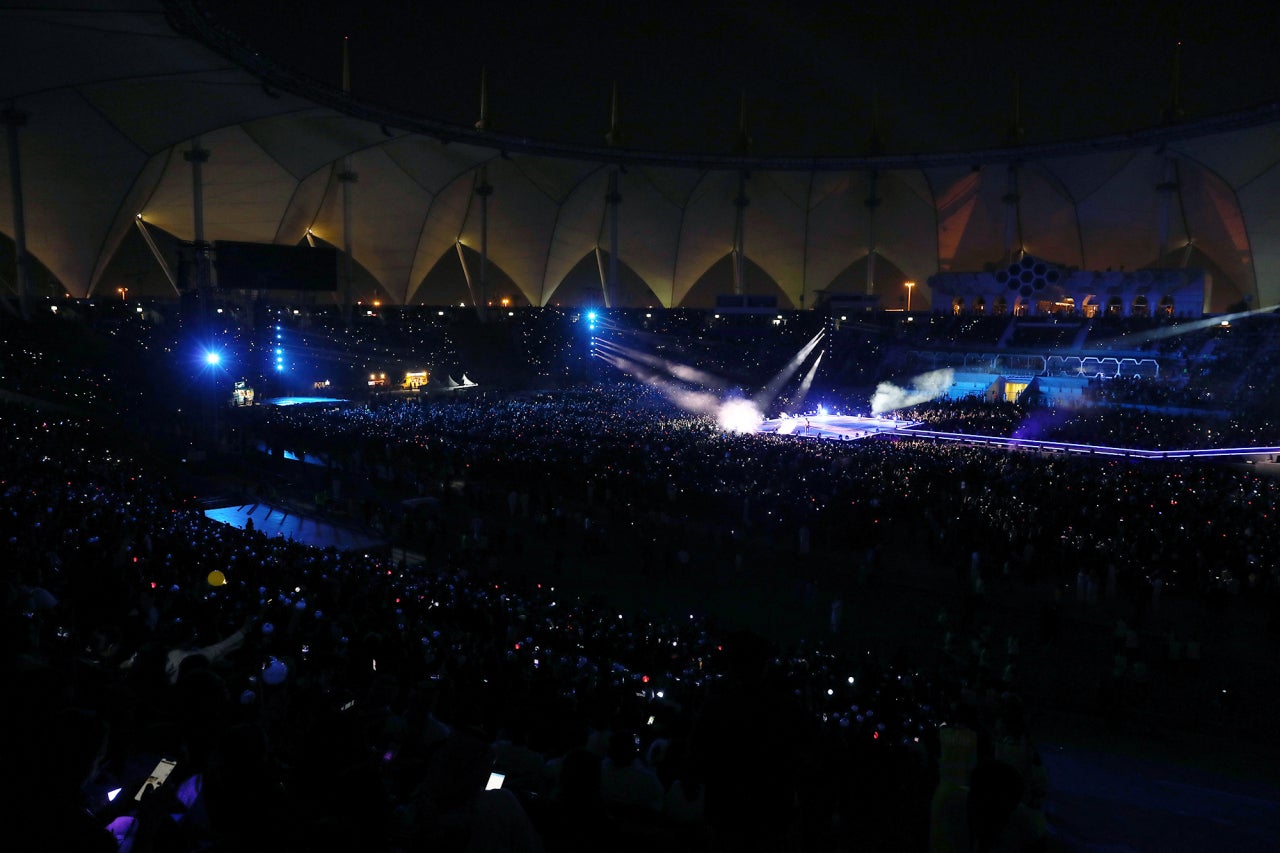 There were no more mysteries left. The night with BTS was awe-inspiring and the fans overflowed with love. Overall, it was a testament to BTS’ perpetual global popularity that has already dominated one of the most conservative countries in the world.

“What is important here is that the universal charm and message of BTS’ music have been constantly accepted by, and speaking to a completely different Islamic culture. There have been some K-pop events held in Islamic regions in the past, but I think the heat and attention on BTS’ Riyadh show are something very unique,” culture critic and the author of book “BTS — The Review: A Comprehensive Look at the Music of BTS” Kim Young-dae told The Korea Herald.

“Through this concert, BTS’ music and message will be able to deliver some positive messages to Islamic countries. I think the show has a historic meaning in that beyond its successful result, it has the possibility to serve as a momentum for the continuous BTS phenomenon. Furthermore, it might provoke further global interest in K-pop and its culture, providing opportunities for other groups.”

BTS is set to wrap up its world tour with concerts in Seoul from Oct. 26-29.

Read Next
Ku Hye-sun says she will stop writing about Ahn Jae-hyun
EDITORS' PICK
Senate may remove lump sums in 2021 budget due to NEP insertions – Lacson
Fire hits JG Summit petrochemical plant in Batangas City
Water remains our saving grace right now
The power of two: Renewable energy and natural gas are the cleaner, better combination
PH COVID-19 total caseload now at 301,256
KZ Tandingan taking it one step at a time
MOST READ
PH Embassy in Qatar suspends repatriation of OFWs
Fire hits JG Summit petrochemical plant in Batangas City
Has Duterte done any good? Robredo says yes, but he missed out on many things
Slower internet seen due to 5-day maintenance work
Don't miss out on the latest news and information.