“Star Wars: The Rise of Skywalker” will include scenes of the late Carrie Fisher together with her daughter Billie Lourd, according to director JJ Abrams. 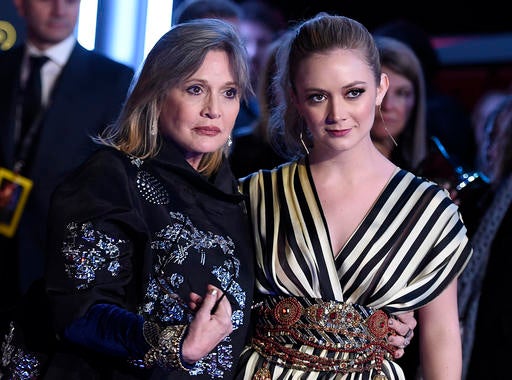 In this Dec. 14, 2015, file photo, Carrie Fisher, left, and daughter Billie Lourd arrive at the world premiere of “Star Wars: The Force Awakens” at the TCL Chinese Theatre in Los Angeles. Lourd says the support she’s received since the death of her mother and her grandmother, Debbie Reynolds, has given her strength. Image: AP/Jordan Strauss/Invision

In an exclusive interview with Vanity Fair on May 22, Abrams revealed that Fisher, who died in December 2016, will share the screen with Lourd in new scenes of the film “The Rise of Skywalker”.

Considered as one of the galaxy’s heroes in the “Star Wars” universe, the iconic role of Princess Leia was played by Carrie Fisher. Billie Lourd took the role of Resistance officer Lieutenant Connix in “Star Wars: The Force Awakens” and “Star Wars: The Last Jedi”.

Abrams admitted that he initially wrote out Lourd’s character in scenes with Fisher because he did not want the experience to be “uncomfortable for her” [Lourd].

“[I recall] Lourd [saying] I want to be in scenes with her. I want it for my children when I have kids, I want them to see,” Abrams said in the report.

“She would get emotional [during filming] and have to excuse herself for a minute, I know it was hard for her for a while,” he recalled.

Fisher’s appearance in the final film of the trilogy was weaved in using old footage from “The Force Awakens”. According to Abrams, the lighting of Fisher’s footage was fixed to make it look right. New scenes were also created in the film to fit her dialogue.

“There are moments in this movie where Carrie is there and I really do feel there is an element of the uncanny, spiritual, you know, classic Carrie that it would have happened this way,” Abrams said. “Somehow it worked, and I never thought it would.”

“The Rise of Skywalker” will hit theaters on December 2019. Hannah Mallorca/JB