After December 2019’s “Star Wars: The Rise of Skywalker”, the first in a new set of “Star Wars” films, which is due in 2022, will be steered by “Game of Thrones” television series pairing David Benioff and D. B. Weiss. 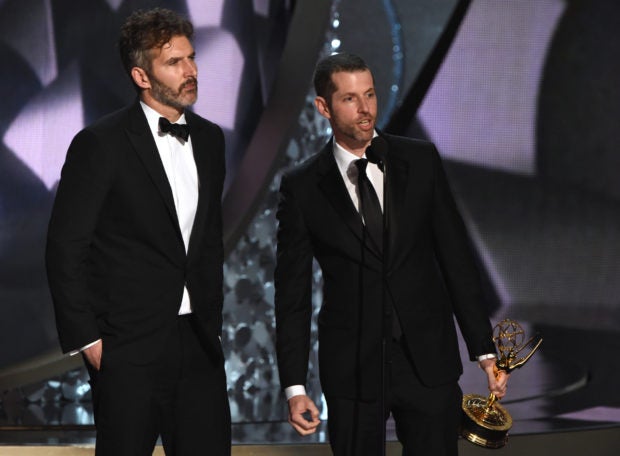 Writer/producers David Benioff (L) and D.B. Weiss (R) accept the Outstanding Writing for a Drama Series for “Game of Thrones” episode “Battle of the Bastards” during the 68th Emmy Awards show on Sep. 18, 2016 at the Microsoft Theatre in downtown Los Angeles. Image: AFP/Valerie Macon

Disney CEO Bob Iger has detailed some of the studio’s plans for “Star Wars” following sequel trilogy closer “Star Wars: The Rise of Skywalker” in December.

“Game of Thrones” overseers Benioff and Weiss had been connected to the new series of films early on in 2018 and Iger’s confirmation again frames them as writers and producers.

Announcing a Dec. 16, 2022 date for the next “Star Wars” after “The Rise of Skywalker”, Iger explained that studio leads “felt three years [between now and then] was the proper amount of time to not only take a breather and reset, but to gear up for the next film’s release,” per Variety‘s reporting.

Iger stopped short of naming a director for the “Star Wars” project, though it would appear likely that Benioff and Weiss will stick to the producing and writing roles they have found the greatest success with.

That said, the pair have co-directed three episodes of “Game of Thrones”, one in season three and another in season four, as well as the entire saga’s final episode at the end of season eight.

The collaborators are credited with writing the majority of the hit show’s episodes, adapting them from the novels by George R. R. Martin. RGA/JB

It’s not too late to dive into ‘Game of Thrones,’ with help