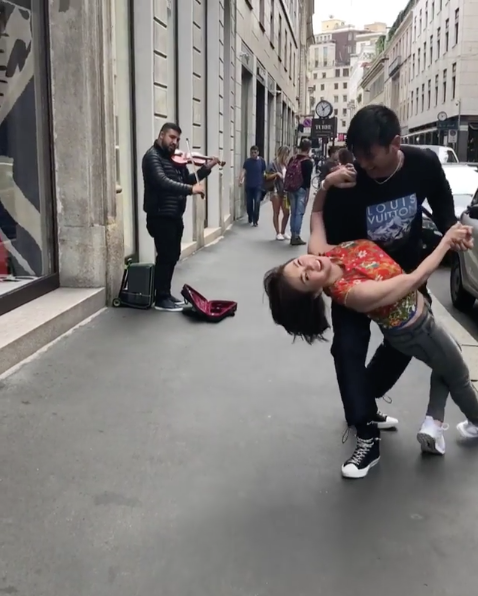 Celebrities have different means of celebrating the milestones in their lives. It seems Vicki Belo and husband Hayden Kho are no exception as they took to the streets of Milan to mark their first wedding anniversary.

“Trying to remember our steps, dancing on Monte Napoleone, Milan,” wrote Belo in a post she shared via Instagram yesterday, Sept. 2. She uploaded a video of herself and Kho, re-enacting their wedding dance to a tune played by a street violinist.

The couple danced their hearts out, seemingly unaware of their surroundings. They were so absorbed in their own world that they became oblivious to the looks and smiles delighted passersby gave. “We’ve forgotten the steps but not the feeling,” Belo said in her caption.

In a separate post, Belo shared a sweet photo of her and Kho taken in Montreux, Switzerland. She penned a post outlining how thankful she is for God as well as for Kho, whom she lovingly calls “peepow”.

“One year ago, Hayden and I took the plunge and decided to get married. A very scary decision because our relationship had been quite a roller coaster ride,” she said. “It’s turned out to be the best thing we’ve ever done. We are both happier and more secure. Sure, we still have our little disagreements but they’re just small humps that we learn from.”

Kho also expressed his love for his wife, whom he refers to as “Pingpong,” in a short message on his Instagram account featuring a black and white photo taken during their wedding.

“You have been a blessing to me – God’s voice when I’m confused,” stated Kho. “The Spirit’s comfort when I’m anxious. Jesus’ reminder to me of the hope that is in me. He has joined us together. By His grace, may our union never be severed. Happy anniversary, Pingpong.”

The Instagram account of their daughter, Scarlet Snow, greeted the couple as well in two posts. One was the same photo of the couple in Switzerland uploaded by Belo while the other was a photo of Scarlet Snow during the couple’s wedding last year.