Jose Mari Chan goes viral again with ‘Christmas in Our Hearts’, and Luis Manzano knows why 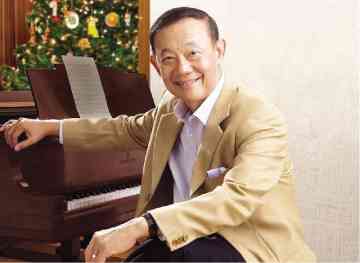 A certain Choco Martin took to Facebook on Sept. 1 to share an old video of Chan singing the beloved song in a mall. As per clarification made by the netizen with INQUIRER.net on Sept. 4, the video was from 2015, and which he found recently again in his files. He said he thought about posting it in the spirit of Christmas, and since the people are cheered up anyway by the “pambansang mang-aawit ng ‘Pinas tuwing Pasko” (our national singer every Christmas).

In the viral video, Chan can be seen singing the song to the dining patron at the food court in SM Megamall in Mandaluyong City, much to the joy of his manifold fans. Someone in the background can be heard asking, “Siya ba yun? (Is that him?)”

The video shows Chan walking around the food court, first approaching the people in front of Goto King while men with cameras followed him around. He then shakes the hands of people in other tables as more crowded around him to take selfies and videos.

“Christmas in Our Hearts” was released almost 28 years ago in November 1990. It was Chan’s first ever Christmas album and is said to be the first OPM (Original Pinoy Music) album to surpass Diamond status. Today, it is one of the biggest-selling albums in the Philippines.

Chan’s famous song has been a Yuletide joke for some, as it is usually played around public spaces even months before December. Whether it’s to get people excited for Christmas and simply spread joy to the hearts of many remains unknown, but it seems actor-host Luis Manzano has cracked the code.

Manzano took to his Instagram on Sept. 2 to share an infographic explaining why Chan’s songs start playing every Sept. 1.

In the infographic, the number of letters in Chan’s name were added together, which equates to 12. December, as known, is the twelfth month of the year.

Then, the letters in Chan’s name were added based on the number of their sequence in the alphabet. This equates to 116. September 1, which pertains to the date Chan’s songs are played every year, equates to 91, as September is the ninth month of the year, while 1 is the day. 91 was then subtracted from 116, totaling 25. Thus, Dec. 25.

Is it coincidence or destiny? NVG

JOSE MARI CHAN: Where the heart is