Ella Cruz and Julian Trono to star in own movie 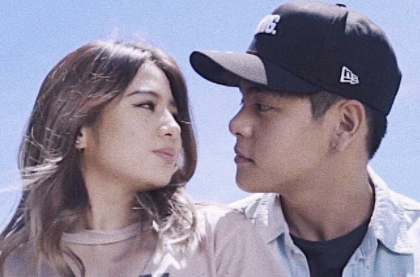 The dance tandem of Ella Cruz and Julian Trono will be taken to a whole new level. The two will star in their official launching movie, “Fanboy/Fangirl” from Viva Films.

The movie is a romantic-comedy that showcases the fun side of this Viva love team. Cruz plays the role of Amy, a film dubber who fangirls over Oli played by Trono, a frustrated actor who strives hard to make it big in showbiz.

Despite the trust of their management, JulianElla, as they’re called, still feels pressured.

(I felt the pressure when our director informed us that Boss Vic has seen the movie. I was nervous as they gave us their feedback.)

(I always ask our director, ‘Is this real?’ Are we really about to finish the movie? Is it true that we’d be showing it soon?)

Cruz and Trono hope that their fans, who first admired them for being a dance duo, would also love them as a couple on the big screen.

(We used to do music and dance videos. Now, we’re acting. It’s a different side of us that we hope people would enjoy. The magic of dancing is different from the magic of acting.)

On being ‘the next JaDine’

Some say that the chemistry they show resembles that of James Reid and Nadine Lustre’s, when JaDine was just starting. Reid and Lustre started off as singers before being paired together. With similar paths, JulianElla don’t mind at all being compared with JaDine.

(Well, we’re looking forward to being accepted as well, the way they were accepted, or more than; the future will take care of itself.)

(We just do whatever task is given us. What’s important is we like what we’re doing.)

“Fanboy/Fangirl” is showing on August 12 in cinemas nationwide. JB

Julian Trono on ‘relationship’ with Ella Cruz: We’re not into labels