Lav Diaz lures Charo Santos out of hiatus for Venice 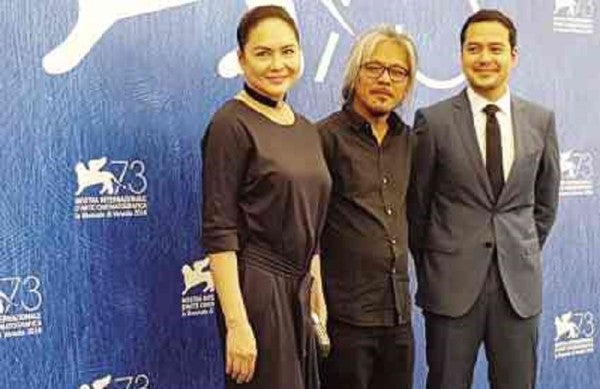 The audience at the Venice Film Festival who sat through the independent filmmaker’s 226-minute Philippine drama on revenge and forgiveness should know.

It was this art of exploring human drama at length that tempted actress-turned-media executive Charo Santos-Concio back to the screen after nearly two decades, she said at the festival.

Concio plays the lead in “Ang Babaeng Humayo” (The Woman Who Left), which premiered in Venice on Friday.

It is one of 20 US and international films competing for the coveted Golden Lion that will be awarded on Saturday (Sunday in Manila).

“I really wanted to work with this director … I wanted to understand the aesthetics behind his cinema, why he produces long-running films,” Concio, the former president and chief executive officer of ABS-CBN Corp., told Reuters.

The movie tells the story of Horacia, a schoolteacher who spent 30 years in a correctional facility for a crime she did not commit. When she is finally released, she plots her revenge against the ex-boyfriend who framed her, but at the same time struggles with the desire for forgiveness.

The colorful movie was shot in black and white and on a Philippine island where Concio grew up.

“Emotionally she is attached to the geography, to the grounds, so it’s easier for her, you can actually feel it, she was very emotional about the location, it helped contextualize the character,” Diaz said.

“The Woman Who Left” is premiering just months after Diaz’s more than eight-hour “Hele Sa Hiwagang Hapis” (A Lullaby to the Sorrowful Mystery), featured in Berlin.

“Whenever I shoot a film, I’m not thinking about length … my cinema is very free in terms of structuring and form,” the 57-year-old director said, challenging his fellow filmmakers to cross the boundaries of conventional cinema.

“I can shoot even without money. I have my own small camera, I have my small crew … we go to an obscure island, invite some actors, they’ll be with us for a month and we create some cinema there,” he said.

For Diaz, his latest movie is a search for what defines the Philippines after years of foreign rule and the leadership that followed. But he also challenges viewers to examine why there is so much trauma and torment in society.

“This is the 21st century and we’re still barbaric, we are still very primal, we still act like animals. Why? We should question that,” he said.

From a dazzling musical to a biting comedy, films from the United States and Argentina are tipped as favorites to win this year’s Golden Lion award at the Venice Film Festival.

Top international film critics, gathered on the glamorous Lido di Venezia for the 10-day fest, cheered the quirky tale of a struggling jazz pianist and his actress girlfriend in Los Angeles, a joyful tribute to the Golden Age of American musicals.

“I felt like it was the most dangerous film I’ve ever done, because everyone knows what Jackie looked like, sounded like, walked like,” Portman admitted to press at the star-studded festival, where A-listers arrived by water taxi.

Terrence Malick’s long-awaited “Voyage of Time: Life’s Journey,” a documentary on the life and death of the universe, moved critics and the public alike with its use of stunning special effects and real-life images of earth’s most breathtaking creations.

But these glossy, US heavyweights are being challenged by Argentinian directors Gaston Duprat and Mariano Cohn with their comedy “The Distinguished Citizen,” about a Nobel Prize-winning author who returns to his village for the first time in 40 years.

Diaz’s “The Woman Who Left” is also hot on their heels.

The awards ceremony is set to begin at 5 p.m.

Venice has strengthened its reputation in recent years as a launch pad for the Oscars with “Gravity,” “Birdman” and “Spotlight” all premiering here.

Spooking and stirring in equal part, with arresting performances from US stars Amy Adams and Jake Gyllenhaal as lovers gone awry, the film tells a story within a story about self-harm, love, betrayal and revenge.

The best actor award is tipped to go either to Oscar Martinez, who plays the cynical novelist in “The Distinguished Citizen” or Gosling, for his tap-dancing, crooning character in “La La Land.”

Amy Adams is in the running for Best Actress not only for “Nocturnal Animals” but also “Arrival,” in which her character is all that stands between a group of civilized aliens and the leaders of the world powers, eager to reach for the nuclear button.

Should the jury, lead by British film director Sam Mendes, have a penchant for such tentacled creatures, Mexico’s “The Untamed” by Amat Escalante may be in with a shot, with its take on an extraterrestrial who sexually pleasures the brave and foolhardy.

A total of 20 films are competing, including Ana Lily Amirpour’s second film “Bad Batch,” a cannibal love story with Jim Carrey and Keanu Reeves about a young girl who ends up on the menu in a futuristic United States.

The beautiful “A Woman’s Life,” by French director Stephane Brize, is tipped to snap up the Silver Lion for best direction. The rich period drama, set in 19th century France, tells the tale of a childlike baroness tormented by a rakish local viscount.

For the Lav of Charo