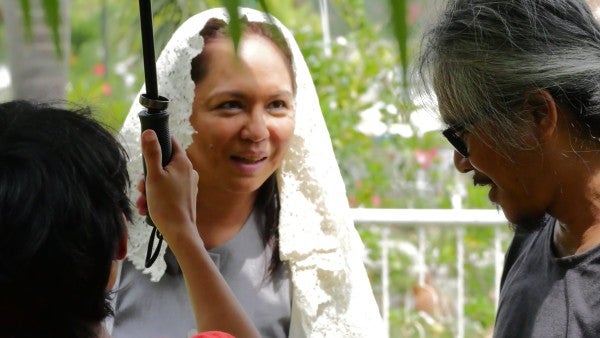 “It’s the only Asian film in Venice’s lineup this year,” Santos told the Inquirer in a phone interview. “We are so happy!”

The 73rd Venice Film Festival, one of the world’s top three cinema events (along with Cannes and Berlin), will be held in Italy, from Aug. 31 to Sept. 10.

Santos recalled that she had learned the good news from Diaz. “He was the first one to text and congratulate me about it. Nakakatuwa (It makes me happy)! It feels great!”

Santos, who had just retired from her post as president of the network ABS-CBN, marks her acting comeback in the country’s entry in the Venice fest. She last appeared in Jerry Lopez Sineneng’s “Esperanza the Movie” in 1999.

“I feel like I am being launched again as an actress,” she quipped, half in jest. “It’s another great honor for the country to be included in Venice.”

Santos, who currently serves as ABS-CBN chief content officer and president of the ABS-CBN University, won best actress at the Asian Film Festival for her debut film, Mike de Leon’s “Itim,” which was released in 1976.

Diaz said Santos easily “connected with the story” upon reading the script, which was inspired by Leo Tolstoy’s short story “God Sees the Truth but Waits.”

“I immediately empathized with my character,” she pointed out.  “It’s a story of forgiveness, of transcendence.”

Diaz previously won prizes in the Orizzonti section of Venice: Special Mention for “Death in the Land of Encantos” in 2007 and the top plum, Venice Horizons award, for “Melancholia” in 2008.

Diaz told the Inquirer that there are two other Filipino productions in the side sections of Venice this year: Eduardo Roy’s “Pamilya Ordinaryo” in Venice Days (similar to Cannes’ Directors’ Fortnight) and Bradley Liew’s “Singing in Graveyards” in the Critics’ Week section.