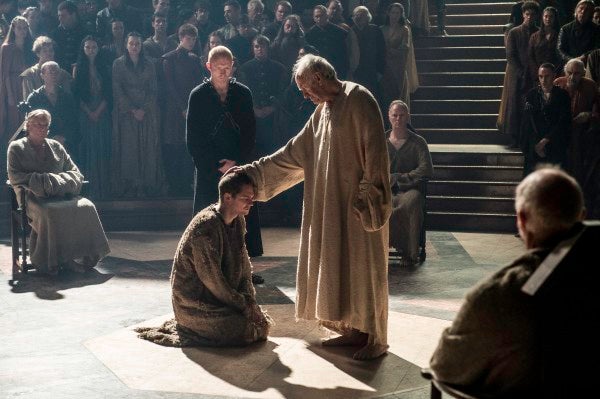 “The Winds of Winter” capped off the sixth season of our favorite series with new deaths, new alliances, new king and queen, new threats and new hope.

The dismal yet chilling sound of the bell rang across the whole King’s Landing as everyone prepared for the trial of Loras Tyrell and Cersei Lannister. The Sept of Baelor was packed with people, including the faith militants, Kevan Lannister, Queen Margaery Tyrell and her father Mace.

Loras’ trial never happened though because he pleaded guilty of the crimes he committed. To fully atone for his sins, he unburdened himself of his worldly desires and promised to devote his life to the Faith. Brother Lancel traced his blade on Loras’s forehead to mark him as the defender of the Seven Gods.

King Tommen was supposed to attend the trial, but The Mountain prevented him to go, as ordered by Cersei who intended to stay at the Red Keep and wait for her plans to materialize. Queen Margaery, meanwhile, realized that Cersei isn’t coming for her trial. The High Sparrow got worried too and sent the militants to get the Queen.

A young girl, one of the “littlebirds”, led Pycelle into Qyburn’s laboratory. Qyburn said his apology and farewell message to Pycelle before a group of children pounced on the old maester and dug their knives to his flesh.

Another littlebird shrewdly led Lancel into the crypt beneath the Sept of Baelor. Lancel found himself in a dark alley when he was stabbed by the little boy he was chasing. He noticed wooden barrels around him and at the end of the alley, he saw the burning candles atop small puddles of wildfire. All this time, Cersei was staring out from the balcony at the Red Keep, her eyes fixed at the Sept located just meters away.

Queen Margaery argued with the High Sparrow that Cersei didn’t really intend to show up and face the consequences of her trial. She sensed that something bad will happen. She tried to get everybody out the Sept but she was barred by the militants.

Lancel knew what the wildfire is for so he dragged himself but didn’t make it in time to extinguish the candles. The small flame sparked the massive explosion as the wildfire crept from the underground room and up the Sept, detonating the whole place and expunging all the people inside.

Cersei watched as thick plumes of smoke rose high into the air. Her major enemies were already gone but she wasn’t done yet. The next subject of her revenge was Septa Unella, who was secured on a table in one room. Cersei poured wine onto her face and made her confess, mimicking what the holy woman did to her wheh she was jailed before. She turned over Unella to the Mountain who began inflicting torment upon the woman.

King Tommen could still see the remnants of the explosion from afar and was informed about the casualties. When he could no longer handle the agony the event caused, he took off his crown and jumped off the window to his death. Cersei knew after all that her children will die based on a prophesy so she just asked Qyburn to burn her son’s remains.

Samwell and Gilly finally reached the Oldtown and headed straight to the Citadel. Sam was given access to the library as the future maester of the Castle Black. He walked into the chamber where thousands of books were shelved and all he could do was to look around in an open-mouthed wonder.

The Freys celebrated the retaking of the Riverrun and their stronger alliance with the Lannisters. Jaime Lannister and Bronn were present to join the party at the Twins. Jaime later mocked Walder Frey and questioned the need for the alliance when the Freys couldn’t competitively protect the Riverlands.

At the Winterfell, Davos interrupted Jon Snow and Melisandre’s small talk to confront the red priestess about the death of Shireen, Stannis Baratheon’s daughter, who Davos treated as his best friend and his own child. Melisandre admitted the girl was burned at the stake. Davos asked Jon to execute her but Jon instead sent her into exile in the south.

Jon, meanwhile, recognized they won the battle against the Boltons through Sansa but doubted her trust to Lord Petyr “Littlefinger” Baelish. Sansa apologized that she didn’t tell about the knights of the Vale. Jon reminded her that they have made a lot of enemies so they need to trust each other now.

The Queen of Thorns Olenna Tyrell, amidst mourning the loss of her family, was invited to Dorne by Ellaria Sand who proposed about the Martell-Tyrell alliance against the Lannisters. Varys came out to seal the deal, offering what Olenna truly needs—“Fire and Blood” (the family “words” of House Targaryen).

Queen Daenerys wanted her lover Daario Naharis to stay in Meereen with the Second Sons to keep the peace in the city despite his insistence to go with her in the Westeros.  She felt badly about her decision and Tyrion Lannister tried to console him. “The Imp” later affirmed his passionate loyalty to Daenerys and was made the Hand of the Queen.

Back to the Twins, Walder Frey was served his meal by a young cup-bearer. He was asking about his two sons who were supposed to see him earlier in the day. The girl said they are in the pie she just fed him. She unmasked her face to reveal her true identity: Arya Stark. Arya said her parting words before slitting Walder’s throat, just like the same way her mother Catelyn was killed.

Littlefinger shared to Sansa how he pictured himself sitting in the Iron Throne, with Sansa by his side. He dived in for a kiss, but Sansa pulled away. As she walked out on him, he threw her a question: Who should the North rally behind? The true-born daughter of Ned and Catelyn Stark or a motherless bastard born in the south?

The reanimated Benjen Stark parted with Meera and Bran as he dropped them off at a weirwood tree. He said he can’t pass beyond the Wall as he is already dead. But he will be around preparing for the coming war (with the Whitewalkers) to fight for the living. Bran traveled  to the past again and joined his father Ned inside the Tower of Joy. Her aunt Lyanna was there, dying in her bed. She whispered something to Ned, her last wishes, and a crying baby was brought to him. The baby’s face was shown and the shot cut to face of Jon Snow; the scene hinted the story about Jon’s parentage.

Jon and Sansa presided over a meeting at the hall in Winterfell. Some Stark bannermen were concerned about the presence of the wildlings, but Jon defended them as friends in the battlefield. Most of the men also wanted to go home to prepare for the coming winter. But the war is not yet over, as Jon said, and the true enemy brings the storm.

Lady Lyanna Mormont jumped down on the skeptics’ throat and reminded Wyman Manderly, Robett Glover and Cley Cerwyn when they refused to help House Stark in the most desperate times. But the North remembers, she said, and she knows no other king than the Stark king, bastard or not. The allied rulers came to their senses and one by one affirmed anew their fealty to Jon, the new King in the North.

At the Great Hall, Cersei was proclaimed the new Queen of the Seven Kingdoms, while her brother-lover Jaime displeasedly watched from the gallery. “Long may she reign,” Qyburn declared. But perhaps not so long, as the Targaryen fleet, with Drogon in tow, finally set off on their voyage to the Westeros.