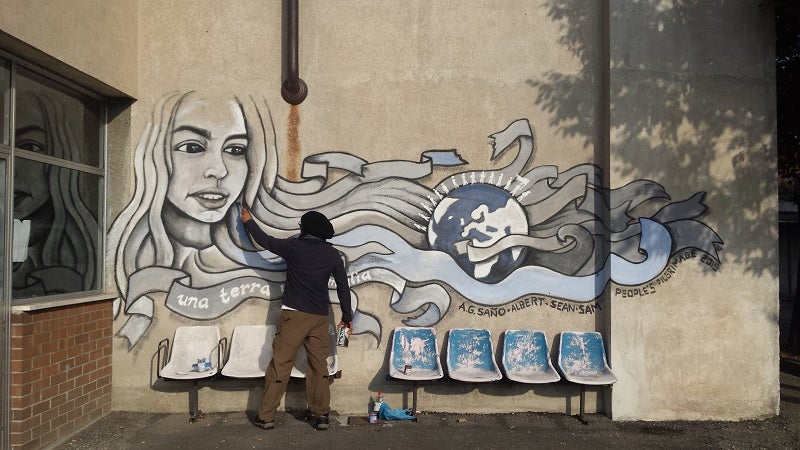 YAYA DUB AS MOTHER NATURE Artist AG Saño adds finishing touches to a mural done with other artists at a stop in Galliate, Italy, on their Climate Walk from Rome to Paris. The woman depicted in the mural as Mother Nature is modeled after instant celebrity Maine Mendoza, or Yaya Dub of “Eat Bulaga.” Photo by albert lozada,greenpeace southeast asia

From television to social media to international newscasts. That’s how far the “AlDub” phenomenon has gone, if the latest BBC news feature and Bloomberg video were any indication.

Bloomberg’s Oct. 29 video centered on the virtual gold mine that advertisers and global commercial brands have discovered in the unconventional love team.

“Everything you need to know about lip-synching, being in love with somebody you have never met and how to break records on Twitter,” the BBC story said of its primer on “AlDub,” a play on the first names of TV actor Alden Richards and social media star Maine Mendoza (aka Yaya Dub).

Since July, when the short skit was launched on the longtime noontime show, “Eat Bulaga!” the split-screen couple had to overcome countless obstacles that prevented their meeting face-to-face, a cliffhanger device that had their frustrated fans tweeting furiously after each episode. By end of September, the tweets had set a record of some 26 million.

Most of the tweets begged writers of the open-ended series to push the romance a step further and have the pair meet in the flesh.

On Oct. 24, they did, before a record crowd of some 55,000 at Philippine Arena in Bulacan province at a concert meant to benefit victims of Typhoon “Lando” (international name: Koppu). The event generated more than 41 million tweets, which surpassed the previous record set by the Fifa World Cup in Brazil.

BBC News also cited the Philippines’ being “a musical country” to explain the popularity of Yaya Dub, who gained a huge following on social media for mastering the online art of Dubsmash, or lip-synching over catchy songs, and starting the craze.

“Skillful lip-synching was what propelled Maine Mendoza, who was already an Internet celebrity and known as the ‘Dubsmash queen,’ onto the show in the first place,” the BBC story said, adding that while the couple has no speaking lines on the short skit, the two interact “by blending lines from popular songs and movies.”

“Thanks to her role as Yaya Dub, Mendoza has now become the third fastest-growing celebrity on Twitter, after US singers Taylor Swift and Katy Perry,” BBC News story said.

The Bloomberg video explained the popularity of this “accidental love pairing” by citing “how well it translates to other forms of media,” with fans continuing their interaction with the couple and each other via social media.

The modern Cinderella story—of an ordinary girl (Yaya Dub) meeting her Prince Charming—is a formula that romantic Filipinos are familiar with, although AlDub’s open-ended script gets AlDub fans following the love team closely because “they want to know how (their story) turns out,” said Ehden Llave Pelaez, the social media manager of iSentia Brandtology.

The script has that “go with the flow, what the fans what to see” formula, she added.

In response to a question by Bloomberg’s Rishaad Salamat on “Trending Business,” Pelaez explained that the split-screen couple’s appeal was no longer confined to the Philippines but has crashed into five continents so far, because the idea was “new and refreshing,”  and the young couple’s appeal “cuts across segments,” connecting to a wider audience.

It’s an indicator that global brands have been quick to exploit, she said, citing the fast food chain McDonald’s as “leveraging (AlDub’s) popularity” to sell its brand. 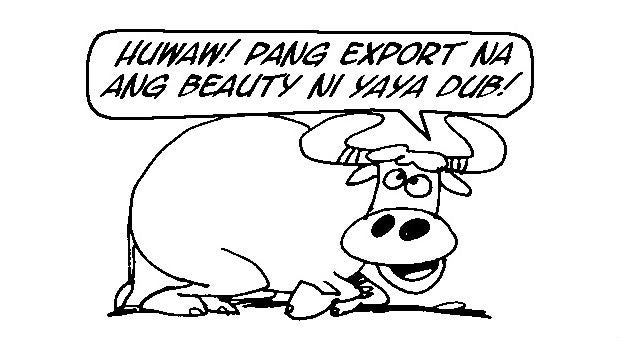 “It’s become a major hit on social media (and has become) a gold mine for anyone associated with it,” Pelaez agreed, adding that aside from McDonald’s, the telecommunications brand Talk n Text, a household cleanser, an adult milk formula, and a local sardines brand have TV commercials (TVC) that feature the couple or one of them.

Politicians have been as quick to take note of the love team’s wide appeal and its possible impact on young voters.  Even candidates from the militant Left have not been immune to AlDub fever, including Bayan Muna Rep. Neri Colmenares, a confessed fan of the couple.

Colmenares expressed confidence that his fellow AlDub followers would support his senatorial bid in 2016, since the “AlDub Nation” was as concerned about politics and other issues besetting the country, he said.

The human rights lawyer was formally introduced on Thursday as one of the 12 senatorial candidates of Partido Galing at Puso, headed by presidential aspirant Sen. Grace Poe and her running mate, Sen. Francis Escudero, at Club Filipino in San Juan City.

“Their support is very important because we don’t have enough financial resources,” Colmenares said. With a report from Marlon Ramos

Is Rep. Neri Colmenares the ‘official lawyer’ of ‘AlDub’?

Read Next
Sequel to ‘One More Chance’ opens Nov.25, John Lloyd Cruz confirms
EDITORS' PICK
Every Filipino home can now be a smart home with realme TechLife
PLDT Home Prepaid WiFi customers now under the care of Smart
Nestlé Philippines’ ‘NESCAFÉ Plan’ bags Grand Anvil at PRSP 56th Anvil Awards
Wesley So officially a US citizen
‘Pilgrim of peace’ Pope Francis heads to war-scarred Iraq
WHO: Arrival of vaccines in PH ‘a powerful step’ towards economic recovery, normalcy
MOST READ
Kris Aquino dispels rumors on son Josh getting married, thanks Ogie Diaz for defending him
LTO’s P500-M deal for screws draws scrutiny
Wesley So officially a US citizen
Ginebra trades Slaughter to NorthPort for Standhardinger
Don't miss out on the latest news and information.