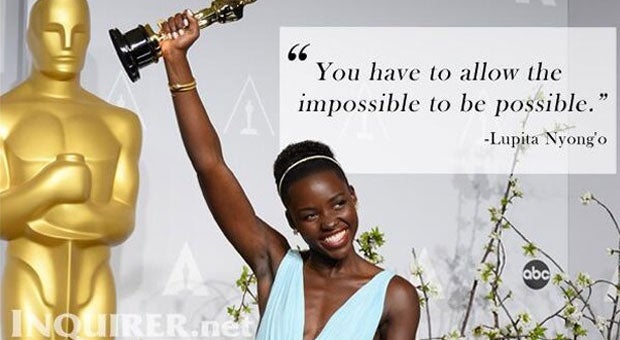 HOLLYWOOD — The following is a list of key quotes from the 86th Academy Awards held Sunday at the Dolby Theatre in Hollywood:

Facing a painful past and present

“I dedicate this award to all the people who have endured slavery and the 21 million people who still suffer slavery today.”

—Director Steve McQueen, on accepting the best picture Oscar for his epic “12 Years a Slave.”

“To my father, I know he’s up there right now, with a big pot of gumbo. He’s got a lemon meringue pie, and he’s probably up there with a cold can of Miller Lite.”

“Sit down, you’re too old to be standing.”

—Cate Blanchett, 44, to the Academy Awards audience who greets her with a standing ovation as she accepts her best actress Oscar for portraying a fallen New York socialite in “Blue Jasmine.”

A selfie seen ‘round the world

“We crashed and broke Twitter. We have made history!”

—Oscar Host Ellen DeGeneres, after a “selfie” photograph of her surrounded by A-listers including Meryl Streep and Brad Pitt became the most retweeted Twitter message ever. The photo has been retweeted more than 2.2 million times, shattering the previous record of 800,000 set by President Barack Obama’s re-election message in November 2012.

“To all of the dreamers out there around the world watching this tonight, in places like Ukraine and Venezuela, I want to say, we are here. And as you struggle to make your dreams happen, to live the impossible, we’re thinking of you tonight.”

“Filipino pride. I’m so excited, I’m just sending love to the Philippines. I know they’ve had a tough year and I just send out my feelings to them.”

—Robert Lopez, whose tune “Let It Go” from the animated feature “Frozen” won the Oscar for best original song, on becoming the first Filipino-American to win an Academy Award. With his win, Lopez has earned a rare “EGOT”: he has won an Emmy, a Grammy, an Oscar and a Tony.

“I can’t believe this is in my hands.”

—Kenyan actress Lupita Nyong’o, backstage after accepting her Oscar statuette for best supporting actress for her role in “12 Years a Slave.”

Understatement of the evening

“Making a film can be a traumatic experience.”

—Alfonso Cuaron, picking up his Oscar for best director for his 3D space drama “Gravity,” the night’s big winner with seven awards.