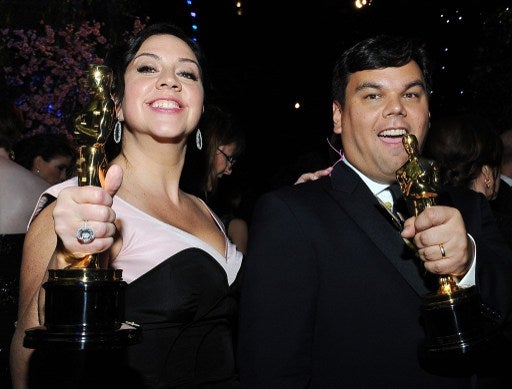 MANILA, Philippines – Today, Filipinos will hear of the name Robert Lopez, the first Filipino-American to win an “Oscar” for his composition “Let It Go,” theme song to last year’s second-highest grossing film “Frozen.”

But more remarkable than his win at the Academy Awards is his inclusion into the “elite” EGOT circle.

Lopez is only 12th person in history to receive an Emmy, a Grammy, an Oscar (for Academy Awards) and a Tony. At 39 years of age, he is also the youngest to do so.

Besting the likes of U2 and Pharrell Williams, Lopez and his wife Kristen Anderson-Lopez, won the coveted Oscar statuette for Best Original Song at the 86th Academy Awards in Los Angeles on Sunday.

During their acceptance speech, the couple thanked their inspirations for the ballad, including their two daughters. At one point, they sang “Happy Oscar to you; Let’s do Frozen 2.”

Prior to “Let It Go,” the Fil-Am composer co-created the musical “The Book of Mormon,” which eventually led him to winning Tony Awards for Best Book of a Musical and Best Original Score in 2011, and a Grammy Award for Best Musical Theater Album in 2012.

It was for his work on the Nickelodeon series “The Wonder Pets” that he bagged two Daytime Emmy Awards for Outstanding Achievement in Music Direction and Composition in 2008 and 2010.

He got his first Tony Award for Best Original Score in 2004 for co-creating the stage musical Avenue Q.

Lopez’s Filipino blood comes from his father, whose father was Filipino. His grandmother is half Filipino and half Scottish-American.

“My father (Frank), who was part-Filipino, was born in a ship on the way to the United States from Manila,” he said in an earlier interview. Philippine Daily Inquirer’s Hollywood columnist Ruben Nepales said Lopez and his wife often scurried to the nearby piano during the interview, breaking into “brief, spontaneous musical snippets.”

His wife Kristen said Lopez, as part-Filipino, is always “trying to figure out who he is, what his place is.” And this is reflected in the characters he develops.

“That’s where his art comes from. He’s attracted to characters who aren’t sure where they belong. That’s a wonderful place to create art from, I think,” she told Nepales.

Unfortunately, Lopez has yet to visit the Philippines. He would have been able to visit Manila for the premier of Avenue Q but his wife was pregnant at that time.

Lopez said he is quite attached to the Filipino-American community in New York.

“I’m connected with the artistic community. It’s a musical culture. I feel like there’s got to be something in there that came to me, even though neither my mom (Katherine) nor my dad are particularly musical. But I have so many Filipino friends who are amazing singers, writers and composers,” he said.