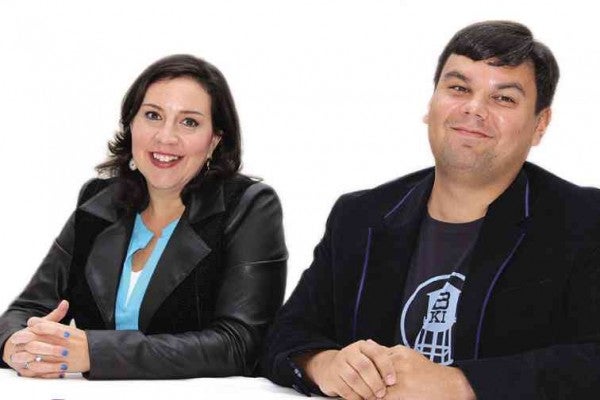 LOS ANGELES—Filipino-American Robert Lopez— Tony, Grammy and Emmy winning composer— played the piano while his wife and songwriting partner, Kristen Anderson-Lopez, sang in her beautiful voice. They traded jokes and teased each other one recent morning at New York’s Waldorf Astoria Hotel. They finished each other’s anecdotes. It was that much fun to interview Robert, cocreator of “The Book of Mormon” and “Avenue Q,” and Kristen, who teamed up to create instant Disney classic songs for Idina Menzel, Kristen Bell and others in Disney’s new animated film, “Frozen.”

“My story is interesting because my father (Frank), who was part-Filipino, was born on a ship on the way to the United States from Manila,” said Robert, boyish-looking at 38, with a naughty glint often sparking his eyes. It was reportedly the last GI boat that left Manila right after World War II.

“His father’s certificate had longitude and latitude on it, not a place but a spot in the ocean,” offered Kristen, who wrote with Robert, Zooey Deschanel and Henry Jackman the Annie Award-nominated songs for the film, “Winnie the Pooh.”

“It must have been a crazy trip for my grandmother,” Robert, a Yale alumnus, added about the voyage. Robert’s grandma was Filipino and Scottish-American while his grandpa was pure Filipino.

“She had a 2-year-old, too,” Kristen volunteered.

Robert added, “It’s a long story—she had divorced her husband and was trying to meet her father.”

“It was an epic story that would really tie into ‘Let it Go’ a little bit,” Kristen said, referring to the powerful anthem sung by Idina in “Frozen,” a visually stunning, entertaining film directed by Chris Buck and Jennifer Lee, the first female director in Disney Animation feature history. “It was like leaving her past behind and going toward a place where she could use her power… ‘Let it Go,’ which we wrote in a day… became the cornerstone of the movie.”

Inspired by Hans Christian Andersen’s “The Snow Queen,” “Frozen” tells the story of two sisters, Elsa (Idina), who has icy powers, and Anna (Kristen Bell—a wonderful surprise—she sings well). As Kristen the songwriter said in the film’s production notes, “It’s about fear versus love, told through a family’s epic journey—their struggle to overcome fear and find the true meaning of love.”

When we asked Kristen if there was a Filipino side to Robert (whom she calls Bobby) that she found particularly charming or endearing, she smiled and said, a bit coquettishly, “Oh my gosh, don’t get me started on his sexy Filipino…” Pause. Then she said, “What is wonderful about Bobby is, because he’s part-Filipino, he’s always been trying to figure out who he is, what his place is. That’s where his art comes from. He’s attracted to characters who aren’t sure where they belong. That’s a wonderful place to create art from, I think.”

We teased Robert and asked where he got his subversive humor, evident in “Avenue Q” and “Book of Mormon,” since Filipinos, while known for their humor, are generally polite. He said, “(Maybe because) I’m part-Scottish, too.” Kristen interjected, “Oh, Bobby’s grandmother was not the typical polite Filipino, no.”

“She was a spark plug, a firecracker,” remarked Robert, who wrote his first song at age 7. “She passed during this process [of composing for ‘Frozen’],” Kristen added. “Yes. It was a sad moment,” Robert said. “We had to stop work. We went up and stayed for the funeral. She was a wonderful woman.”

Robert missed a chance to go to the Philippines for the first time when his “Avenue Q” premiered in Manila. “I never got to see it there,” he said. “At the time that the show was being done in the Philippines, we had our second daughter.”

Kristen cracked, “It’s because he knocked me up. He didn’t get to go to the Philippines. “That was my penance,” Robert riposted, just as quickly. “But I’m going someday.”

“FROZEN” The Lopezes wrote over 20 songs for this film; nine made it.

In the meantime, Robert tries to keep connected to the Filipino-American community, especially in New York, where he and Kristen live. “I’ve had a lot of connection with the Filipino-American organizations in New York,” he said. “I’m connected with the artistic community. It’s a musical culture. I feel like there’s got to be something in there that came to me, even though neither my mom (Katherine) nor my dad are particularly musical. But I have so many Filipino friends who are amazing singers, writers and composers.”

Among the Filipino performers, Robert cited his fellow Tony awardee. “I know Lea Salonga,” he said. “And Hazel Anne Raymundo,” said Kristen of the Fil-Am actress who appeared in “Avenue Q.”

Robert and Kristen, who also collaborated on “Finding Nemo: The Musical,” a live show on its eighth year at Disney’s Animal Kingdom, recounted how they met:

“It’s funny,” Robert began. “Alan Menken and Howard Ashman met in the BMI Musical Theatre Workshop, which is for aspiring songwriters—where you can learn your craft and try out songs for an audience. That’s where we met, too, and started dating.”

Kristen, a Williams College alumna, offered the more interesting version of their first encounter. “He was actually doing his first song for ‘Avenue’ Q’ in a concert (during the workshop),” she said with a grin. “He had gotten hurt. He’d been bitten by the dog of (his ‘Avenue Q’) songwriter partner Jeff Marx’s boyfriend. So he couldn’t play. He was wearing a red yarn wig. He came out and sang a song called, ‘Tear It Up and Throw It Away.’

“Honestly, when he walked in the door, I was already like, ‘I love him.’ Because I always felt like I was going to marry a man who wore glasses and played the piano. This man walked in and I just fell in love at first sight. I came up to him afterward and I was like, ‘Oh my God, you’re so amazing!’ I was thinking, I’m going to marry him. And his thought bubble was like, ‘This girl wants me.’” We all broke into laughter.

“I keep telling her there’s nothing unusual about the story,” Robert said.

“To bring it back to ‘Frozen,’ 10 years later, we just celebrated our anniversary,” Kristen revealed. “We have two daughters, one is eight, one is four. The reason we got so hooked into ‘Frozen’ and believe so strongly in this story is that when they were pitching us this story back in 2011, we saw this art of an older sister. It was the vis-dev (visual development) of Elsa spraying snow into the air and the younger sister looking on like [she was] sighing. It just resonated with our experiences with our two girls, how our oldest is like this magical being to our youngest daughter, and the bond that’s created so early.”

The Lopezes stressed that, whether they were writing for a raunchy musical like “Book of Mormon” or a Disney film like “Frozen,” they would take the same approach. “It’s funny because we approach it from a storytelling point of view, whether we’re writing for a character from ‘The Book of Mormon’ or from ‘Frozen,’ ” Robert clarified. “You’re looking at how do you get this character from point A to B. The projects have a tone but we’re always looking to subvert the tone and catch the audience by surprise, whatever the tools are. And melody is melody.”

Kristen said, “The irreverence of ‘Book of Mormon’ and ‘Avenue Q’ is in a Disney princess singing that she’s sassy. It’s in a snowman who is talking about the hot and cold— they’re both so intense, put them together, it just makes sense. That kind of turning something on its head is where we come from. Everything else is about telling the story in the right way, making sure the tone of the music is right for the moment in the story.”

They never set out to create controversy, insisted Robert, whose “Book of Mormon” caused a stir. “We’re never out to bum people. We’re out to tell stories. That’s always the way we have to approach things because we know that if a song doesn’t do its work to get you from point A to B, then it’s cut and there’s nothing worse than getting your song cut. We wrote over 20 songs for this film and only nine of them made it. There’s going to be a deluxe edition of the soundtrack coming out on Nov. 25 that will feature some of our demos.”

One of the standout songs in the film, which also features the voices of Jonathan Groff, Josh Gad and Santino Fontana, is a duet between Idina and Kristen Bell, “For the First Time in Forever.” Idina’s piece de resistance in the film, “Let it Go,” did not go through as many revisions as the songs that the pair made for Kristen Bell did.

“The song we wrote for Kristen kept changing, so we had to keep writing songs for her,” Kristen the composer said. “Poor Kristen Bell had to keep learning them, but luckily, she was so smart and great to work with.”

She asked Robert, “Do you want to play it real quick?” Then she said, “This is how Kristen’s mind works. We actually use Kristen’s energy and incredible quick wit, which sounds a lot like this. If you’re in the room with Kristen, you’re feeling this….”

Robert scurried to the nearby piano. As he started playing, Kristen sang. They broke into these brief, spontaneous musical snippets throughout the interview. What a happy, engaging couple! We wouldn’t be surprised if “Frozen” the musical opened on Broadway someday, given the many other songs that were not used in the film.

In the meantime, they are set to premiere “Up Here,” their new musical, in summer 2014. Fresh from his acclaimed production of “Here Lies Love,” David Byrne’s musical on Imelda Marcos, Alex Timbers will direct the show which Robert once described as “kind of like ‘Annie Hall’ meets Cirque du Soleil.”