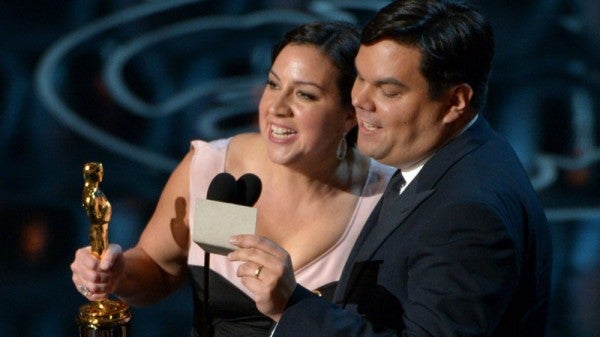 Kristen Anderson-Lopez, left, and Robert Lopez accept the award for an original song in a feature film for “Let It Go” from “Frozen” during the Oscars at the Dolby Theatre on Sunday, March 2, 2014, in Los Angeles. AP

HOLLYWOOD – Songwriter Robert Lopez gave the Philippines some Oscars joy on Sunday as he completed a rare quadruple triumph at the 86th Academy Awards.

The 39-year-old American scooped the Oscar for best original song for “Let It Go” from the Disney hit animated film “Frozen.”

The win, which Lopez shared with his wife Kristin Anderson-Lopez, saw the songwriter join an elite band who have won the grand slam of entertainment industry awards – Emmy, Grammy, Oscar and Tony – or “EGOT”.

Lopez, who is of Filipino descent, paid tribute to his ancestral homeland during a backstage press conference after the win.

“I know they’ve had a tough year and I just send out my feelings to them,” he said, referring to the devastating Typhoon Haiyan which battered the country last November, leaving thousands dead.

Lopez and his wife revealed they are planning a benefit concert for the Philippines on March 12 in New York.

Meanwhile, Anderson-Lopez presented her husband with a home-made necklace to commemorate his “EGOT” status.

“The girls and I made something for you, Bobby. Just in case this moment happened. We made it last week,” she said, hanging it around his neck.

Lopez meanwhile paid tribute to the input of his wife on his phenomenally successful career.

“(She) has been in the background of all of my work – for every single show that she’s not received credit for, she’s been whispering in my ear the whole time,” he said.

“So, I’m glad that she is finally getting credit for being the amazing artist that I’ve always known that she is.”