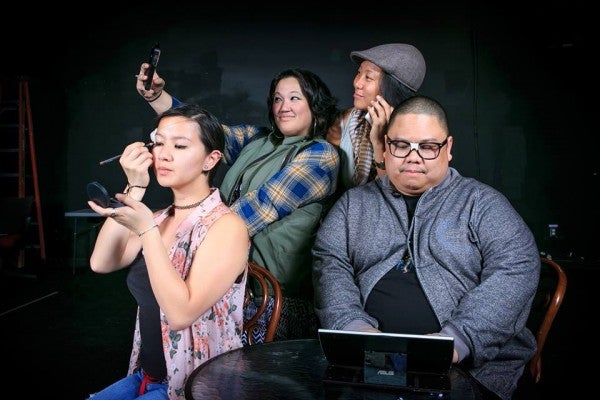 Dating Bebop: Joe Cascasan (Spike) is on a cyber mission, along with his cousin and her girlfriend, to find his dream girl Aura San Miquel (Jet). CONTRIBUTED PHOTOS/BINDLESTIFF

SAN FRANCISCO, California—Bindlestiff Studio’s “The Love Edition: Love Bytes,” recently completed its three-week run of six mini-shows filled with romance, heartache and everything else that comes with the territory of falling in love.

“Our last four shows were complete sell-outs, with the final week being sold out a couple days ahead,” Lyle Prijoles, Bindlestiff box officer manager, said. “This was one of our most diverse crowds, in terms of age, ethnicity, gender, sexual orientation.”

The “Love Edition” lineup consists of “Counting On Love” written by Rod McFadden and directed by Michael Dorado, and featured local artists Marc Abrigo and Dana Soliman.  The characters are Vincent and Sophia, a girl who uses logic and mathematical calculations to help her pinpoint true love.  After a blind date, Vincent hopes to continue seeing Sophia. 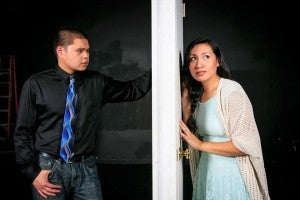 Next up is “Language Lessons” written by Celena Cipriaso and directed by Margaret Guzman.  Marinna Benzon plays opposite Lee Salazar . A previous flame that she cannot seem to forget is tormenting Marinna Benzon’s character, Lara, who is troubled and cannot seem to understand why she does not move on.

“When I wrote ‘Language Lessons,’ I wanted to explore how someone finds closure when there is no closure to find,” Cipriaso explained, “when you can shift through pages and pages of Google results, but you might never find the answer you’re looking for. We rely a lot on things like Google to give us the answers to everything, but sometimes, not even the best search engine in the world can find us our answer. We have to do it ourselves.”

“Instant Harmony” was written by Joe Starzyk and directed by Allan Manalo with Gemma Calderon as the assistant director.  Actors Dennis Rodis, Benjamin Couch, Edwin Ortiz, Dana Soliman and TJ Basa inhabit this, which highlights the use of Internet dating as a lonesome person gets into cyberspace.

Soliman said, “This is my second show with Bindlestiff Studios and I felt so lucky to be able to work with such talented group of actors and production team. Everyone worked so hard to put on a great show! My favorite part of the show is how we were able to thread everything together by using slide shows, the internet, videos, and original music in-between all of our pieces.”

Vincent Jericho wrote the next segment, “Strong Man,” the tale of two men’s growing relationship and their newfound appreciation for each other.  Alan Quismorio directed this with actors Lee Salazar and Jed Parsario.

“Being asked to direct the piece was a gift, having been involved with LGBT activism in the 1990s and the early 2000s,” Quismorio said. “I am attracted to stories that add to the understanding and acceptance of a community that has been demonized, stigmatized, and marginalized, and even ridiculed, by Filipino culture.

Playwright Jericho bravely taps into a personal experience and creates such a subtle yet effective “knee-play.” “I couldn’t have asked for a better pair of the most sensitive and risk-taking actors like Lee Robin Salazar and Jed Parsario,” said Jericho.

“When writing ‘Dating Bepop,’ or anything I write, I like to think there is sincerity when I put something out there,” said Raposas. “My main goal is for people to relate to how something as simple as a boy meeting a girl, can get so complicated with all the modern social media that’s out there. Also I wanted to show how all those complications with dating and social media can make things funny and how distinctive it is to this generation.”

The last segment is “Best Laid Plans” written by Neil Haven and directed by Rhoda Gravador with Ava Tong as the assistant director.  It tells the story of a romantic getaway and time travel taking a toll on Scooter and Feliciana’s date night.  Actors Edwin Ortiz, Lauren Garcia, Ro Ambrosio Birco and Julie Kuwabara are featured in this short play.

“The idea with short plays is that the company can get a taste of the author’s work and if they like it, then the company should reach out to the author to read full-length pieces,” said Neil 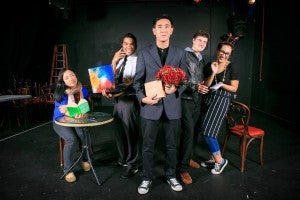 Instant Harmony: Isolation and the Internet lead to an examination of Dennis Rodis (Chris) as he searches for instant harmony. CONTRIBUTED PHOTOS/BINDLESTIFF

Haven. “Unfortunately a lot of companies don’t follow up and use ten-minute play festivals as a way to collect royalty-free scripts, which can be exploitative of young artists rather than supportive.  Companies like Bindlestiff that are supporting young, budding artists have a great resource for finding new, interesting playwrights.”

“Love Edition” was the first production of the year for Bindlestiff Studio. Though Bindlestiff Studio is primarily a Filipino American performance arts space, it’s open to everyone whose stories told on stage resonate any crowd, not just Filipinos. Bindlestiff is a non-profit organization where local and aspiring artists are able to perform and showcase their work. It is home to many veterans, as well as new artists seeking a place to share their creativity.

With a strong Filipino American support system, the Bindlestiff uses its diverse audience to spread knowledge about Filipino American traditions and customs through art. This includes theatrical performances, concerts, workshops open to the public, readings and much more.

For more information to join their team or watch future productions, visit: http://www.bindlestiffstudio.org