HOLLYWOOD – Here is the complete list of winners at the 86th Academy Awards on Sunday: 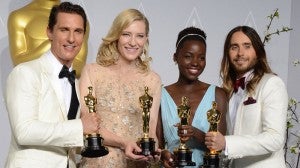