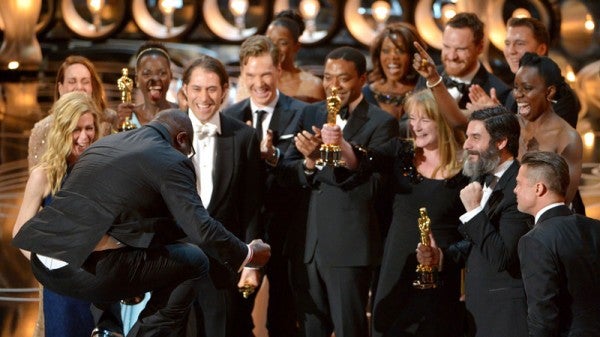 Director Steve McQueen, left, celebrates with the cast and crew of “12 Years a Slave” as they accept the award for best picture during the Oscars at the Dolby Theatre on Sunday, March 2, 2014, in Los Angeles. AP

Steve McQueen’s slavery odyssey, based on Solomon Northup’s 1853 memoir, has been hailed as a landmark corrective to the movie industry’s long omission of slavery stories and years of whiter tales like 1940 best-picture winner “Gone With the Wind.”

McQueen dedicated the honor to those who suffered slavery and “the 21 million who still endure slavery today.”

“Everyone deserves not just to survive, but to live,” said McQueen, who promptly bounced into the arms of his cast. “This is the most important legacy of Solomon Northup.”

A year after celebrating Ben Affleck’s “Argo” over Steven Spielberg’s “Lincoln,” the Academy of Motion Picture Arts and Sciences this time opted for stark realism over more plainly entertaining candidates like the 3-D space marvel “Gravity” and the starry 1970s caper “American Hustle.”

Those two films came in as the leading nominee getters, and “Gravity” still triumphed as the night’s top award-winner. Cleaning up in technical categories, it earned seven Oscars including best director for Alfonso Cuaron. The Mexican filmmaker is the category’s first Latino winner.

But history belonged to “12 Years a Slave,” a modestly budgeted drama produced by Pitt’s production company, Plan B, that has made $50 million worldwide — a far cry from the more than $700 million “Gravity” has hauled in. It marks the first time a film directed by a black filmmaker has won best picture. Its graceful breakthrough star, Lupita Nyong’o, also won best supporting actress and John Ridley won best adapted screenplay.

Read Next
LoveKnots, March 04, 2014
EDITORS' PICK
Individuals affected by ‘Karding’ now over 157,000
Newbie gamers are in for a treat with the power-packed feature of vivo Y16
House energy committee chair Arroyo bats for cheap electricity
Bongbong Marcos says PH ‘open for business’ with new Clark Airport terminal
Karding damage to infrastructure at P23M
Reignite your passion with the vivo Y35
MOST READ
LPA enters PAR, may develop into tropical depression
Angelica Panganiban ‘duguan, sugatang mom’ one week into breastfeeding
Security guard shoots 2 other guards dead inside Makati subdivision
Badoy not with Office of the President, NTF-Elcac, under Marcos admin — solon
Don't miss out on the latest news and information.