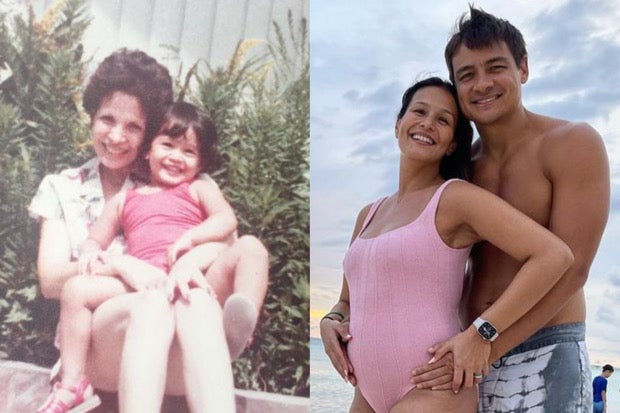 Iza Calzado finally revealed that her first child with businessman husband Ben Wintle is going to be a baby girl, through an open letter she penned for her late mom Mary Ann Ussher.

Calzado honored her mom as she showed old photos of them together that “help keep memories alive,” through the actress’ Instagram page on Monday. Nov. 28.

“Twenty-one years now since you left this world, yet it seems like you always make sure I turn out well,” she wrote. “I know a lot of what’s happened in my life are dreams you had for yourself and for me. When I experience those moments, I truly feel your guiding light.”

Calzado asked her mom for guidance and support now that she is preparing for motherhood, a role she described as an “incredibly fulfilling one.” The actress also talked about her child whom she called “little Mary Ann and little Iza.”

“Pretty soon, I will have my own child. A little Mary Ann, a little Iza,” she said. “Your dreams and mine coming together for this beautiful blessing.”

“I promise to take lots of photos with my baby so she gets to keep those memories with her when the time comes for me to be with you again,” she added.

Calzado then expressed her hope to live a long life, asking her mom to relay her wish to God.

(There is a long journey ahead of me but I know that you will be with me, because mothers — even when they are gone in this world — they will never leave their child. You already proved this.)

Ussher passed away in 2001 when Calzado was 19 years old. The cause of death was initially reported as cancer but in 2019, Calzado revealed that Ussher died of suicide after years of battling mental health struggles.

In a recent press conference, Calzado said that she will not be holding a “gender reveal” party and pointed out that “gender is an expression” which cannot be revealed. The actress then explained in an exclusive interview with Preview that the politically correct term is “sex reveal,” adding that gender is a “social and cultural construct.”

Calzado also noted that she and Wintle accidentally found out the sex of their child which “takes out the point of a reveal” for them.

Pregnant Iza Calzado most grateful for ‘gift of life’ on Thanksgiving

Iza Calzado may matamis na birthday message sa mister: You have shown me what true love is