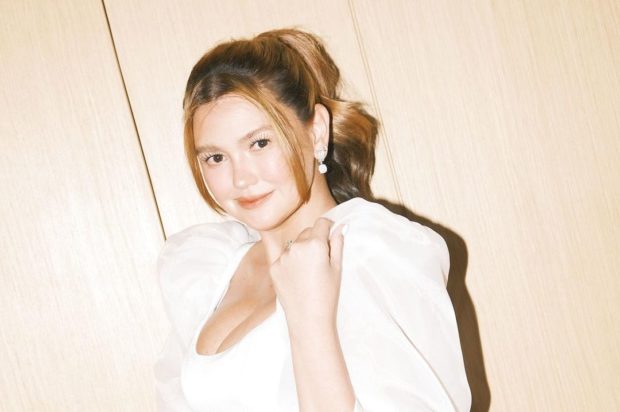 Angelica Panganiban gave a reminder on kindness to newcomers in the showbiz industry, as she received an award for her 28 years as a Star Magic talent.

The actress, who was among the loyalty awardees at Star Magic’s Star Magical Christmas event, stressed that there are certain values an artist must possess if they want to succeed in show biz, as seen on her former “Pangako sa ‘Yo” co-star DJ JhaiHo’s TikTok video yesterday, Nov. 28.

(I noticed that many younger artists aspire to be actors as well, who want to take the same path as we do, why we received loyalty awards. You know, maybe [it takes] patience, trust, communication and courage. You will give up repeatedly. You will tell yourself that maybe this isn’t for you. But you will be surprised, one day, you will be made to realize that this is for you.)

Panganiban admitted that she does not see herself as a “favorite child” throughout her career, but rather the “kontrabida (antagonist).” However, she believes success as an actor comes with being kind to all the staff and crew that one works with.

(The best [way to reach] success—you have to listen—you need to be kind to everyone you work with, to all the staff, the crew, the utility. All of them could be your boss one day. Believe me.)

(Every production assistant who tells you, “Miss [Angelica], it’s your turn,” and you reply with, “Ok, later, because I am still chatting and getting my makeup done.” No! Next thing, they are already your executive producer. And they will say, “Don’t get that actor, she takes too long getting her makeup done.”)

Panganiban highlighted the importance of being kind to everyone from the beginning of one’s career, on top of using their talents.

(Be kind to everyone. Do not be mediocre artists. Do not joke around. Be serious from the beginning and use your talent.)