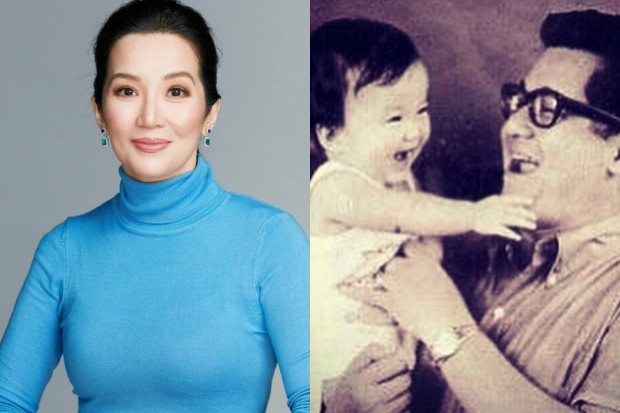 Kris Aquino and a throwback photo of her with her father Benigno “Ninoy” Aquino Jr. Image: Instagram/@krisaquino

Kris Aquino looked back at her fondest memories with her father, late former senator Benigno “Ninoy” Aquino Jr., as she paid tribute to him on what would have been his 90th birthday.

The Queen of All Media showed a throwback photo of herself wearing a shirt printed with Ninoy’s face while greeting him via her Instagram page yesterday, Nov. 28 (Nov. 27 in the United States). Kris, who is currently in the US with her sons Josh and Bimby to get treatments for her autoimmune diseases, is the youngest of Ninoy and former President Cory Aquino’s five children.

Kris talked about her similarities with her father—including his health issues—and stressed that while she did not get to spend a lot of time with Ninoy, she felt that she got to see “so much” of him.

“I only experienced having you as my dad for 3 years [and] 3 months from May 8, 1980 to August of 1983—yet you gave me so much of you… because we had to get to know each other,” she recounted, noting that she was only 19 months old when Ninoy was imprisoned.

“From watching the nightly evening news, to our Barnes & Noble bonding, watching movies (our last was ‘Return of the Jedi’), going to all my school events—among the five of us, I was so blessed,” she narrated. “In Boston you weren’t a vice governor, governor, senator or a political prisoner sentenced to death by firing squad. You were just my dad who called me ‘beautiful.'”

Kris then recalled that Ninoy was the “first to believe” that her childhood dream could come true and she believes she made him proud when her movies, TV shows and endorsements started coming.

“Dad, that’s what sets you apart—your charisma came from the fact everyone who was in your company felt special; innately Ninoy Aquino knew how to make it all about others [and] never about himself,” she said.

For Kris, while her father was a great writer and speaker, he also had “unselfish” love for his fellow Filipinos.

“Subukan mang baguhin ang kwento ng kahapon (There may be attempts to change the story of the past), it’s from you I learned to NEVER show anger, NEVER reveal your weakness,” she addressed her late dad.

“The child of Ninoy [and] Cory, the last still carrying their last names, learned from both: Faith in God, patience, protecting your integrity, standing firm [with] your words, trustworthiness [and] caring for all Filipinos regardless of chosen ‘color’ and sharing [with] those in need—those are values I hold on to [and] do my best to instill in my sons,” she added. “God sees all [and] that’s what matters. #hero”. /ra