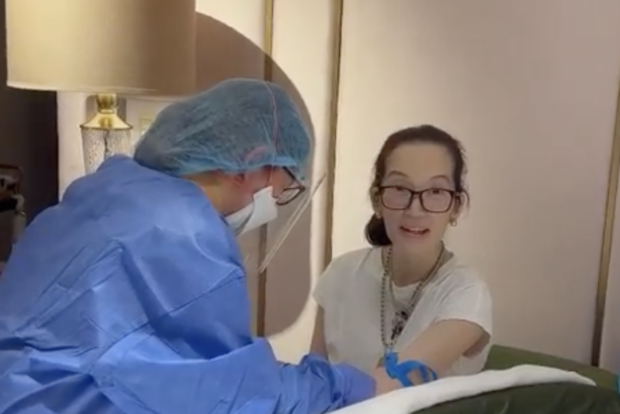 Kris Aquino has revealed that she will begin what could possibly be more than 18 months of diagnosis and treatment, as she expressed appreciation to those who continue to pray for her recovery amid her battle with autoimmune illnesses.

The Queen of All Media finally gave a new update on her health after almost three months while showing a photo of her sons Josh and Bimby via her Instagram page today, Nov. 24.

Aquino admitted that she was hesitant to disclose further information about her health over the past few months as she wanted to have “definite [information]” before telling it to the public.

“It’s step 1 on what will likely be more than 18 months of diagnosis [and] treatment. I’m signed up in a hospital’s center for those with rare [and] undiagnosed illnesses,” she said.

Aquino stated that her last set of test results were “conflicting” so she decided to get diagnosed and treated by a team of multidisciplinary doctors.

“Iba ang process dito (The process here is different). My [first] step was submitting all my medical records from 2018 when my autoimmune was first diagnosed in Singapore,” she added. “I had a teleconsult with the assigned doctor-coordinator for me, then we’ll do a video consult in 2 weeks. I’ll be admitted early 2023 to undergo every imaginable test they’ll deem necessary.”

Given that Aquino is allergic to many types of medicine and steroids, on top of her adverse reactions to medication, her doctor-coordinator admitted that she is a “challenge,” though the series of tests will help determine which course of treatment is best for her.

Aquino and her children will also be extending their stay in the United States and have already filed immigration papers to do so. The actress also said she has been extremely immunocompromised and has never gone to a restaurant, store or a mall since last June.

(I posted a picture of Josh and Bimb—they are my reasons for continuing to fight and why I should not give up. I am enduring the [extreme pain] while allergic to pain relievers, the constant fatigue, awful sense of balance, nonstop dry cough and shortness of breath.)

“I pray for the blessing to be healthy enough to still be their mama—the one who would cook, travels for fun, goes to Church, and watches movies with them. All in God’s perfect time,” Aquino continued.

In time for Thanksgiving in the United States, Aquino also gave thanks to those who have been praying for her and her sons.

“Thank you for praying for me, for us,” she told them.

Aquino last gave a public update on her health last September, when she explained that she was diagnosed with four autoimmune diseases and was experiencing physical manifestations of a possible fifth illness.

The actress has since gone on a social media hiatus, while her fans received occasional updates from her writer-editor friend Dindo Balares, who said Aquino was still “as sharp as ever.”

Despite her battle with illnesses, Aquino still considers herself blessed to have received kindness from people she have never even met.

Kris Aquino, now in Los Angeles for treatments, is still ‘as sharp as ever’