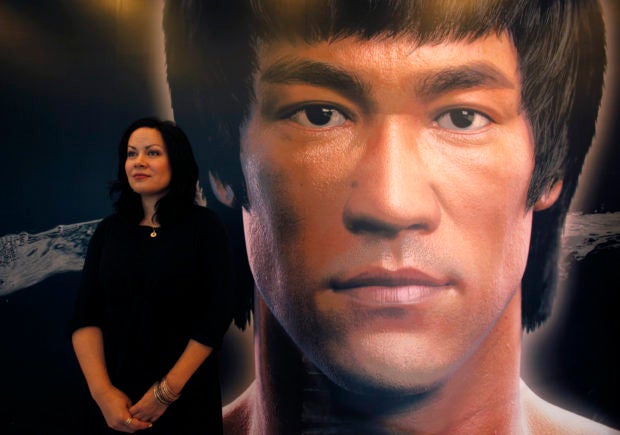 Shannon Lee, daughter of the late Kung Fu legend Bruce Lee, poses in front of a portrait of her father at the Hong Kong Heritage Museum, before the start of a five-year exhibition on Lee, July 18, 2013. Image: Reuters/Bobby Yip

After a pandemic-induced delay, a permanent exhibition focused on Bruce Lee’s philosophy is opening at the Wing Luke Museum of the Asian Pacific American Experience in Seattle, with support of the Bruce Lee Foundation.

His daughter Shannon Lee, who oversees the foundation, told Reuters that the exhibit, “Be Water, My Friend,” was as an immersive extension of her research into her father’s life as a philosopher.

“I didn’t feel like everybody was getting the full picture of the human being. And it’s really part of my mission for people to understand actually what level of philosopher he really was,” Lee said of the project, which is housed in an unassuming historic building in the city’s Chinatown-International District.

She said she remembers little glimpses of life with her father before he died when she was 4: him holding her on his lap and playing, visiting him on set at Golden Harvest Studios, and their home in Hong Kong.

“But the unlimited part of my memory is that I have a real sense of him, him energetically, him, the way he made me feel, the way I felt in his presence. His energy, his love, his adoration, his sense of safety, being with him.”

Her father’s collection of 2,800 books—spanning martial arts theory, filmmaking, and philosophy—will remain at the museum permanently, along with other keepsakes in a separate exhibit.

Seattle is rich with the legacy of Bruce Lee: Ruby Chow restaurant where he once worked, the University of Washington, where he studied philosophy and met his wife, Linda Lee Cadwell, and ultimately where he was buried in 1973 at Lake View Cemetery in the Capitol Hill neighborhood.

For father and son Minh and Michael Nguyen, on vacation from the East Coast, the exhibit was a must-visit attraction.

“I know all about Bruce Lee, not personally, but from film in 1973 when I was in Vietnam, and I like all of his movies. So when my son asked me to take him to this exhibit, I’m very happy to do it,” Minh Nguyen said. AP

Read Next
Ashton Kutcher recounts vision, hearing loss due to rare vasculitis: ‘Lucky to be alive’
EDITORS' PICK
House energy committee chair Arroyo bats for cheap electricity
Karding damage to infrastructure at P23M
Bongbong Marcos says PH ‘open for business’ with new Clark Airport terminal
Individuals affected by ‘Karding’ now over 157,000
Reignite your passion with the vivo Y35
Newbie gamers are in for a treat with the power-packed feature of vivo Y16
MOST READ
Angelica Panganiban ‘duguan, sugatang mom’ one week into breastfeeding
LPA enters PAR, may develop into tropical depression
Badoy not with Office of the President, NTF-Elcac, under Marcos admin — solon
Charges readied vs gov’t guard with P290-M deposits
Don't miss out on the latest news and information.