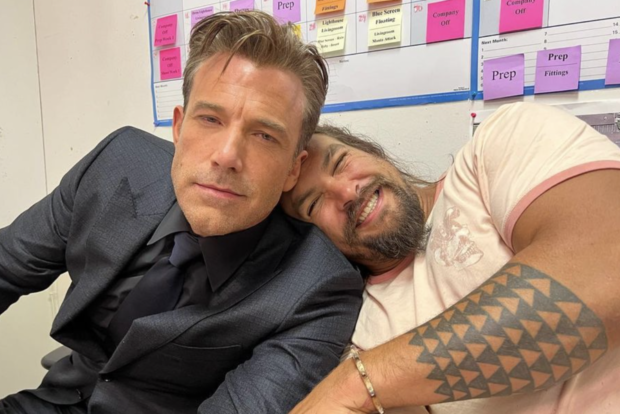 Jason Momoa seemingly revealed Ben Affleck’s return as Batman in “Aquaman and the Lost Kingdom” as they reunited on the set of the upcoming film.

Momoa showed himself all smiles while bonding with Affleck, as seen on his Instagram page today, July 29. Momoa played Arthur Curry (Aquaman) alongside Affleck’s Bruce Wayne (Batman) in the 2017 film “Justice League.”

Momoa also showed a video of himself speaking to fans who were exploring Warner Bros. studios during a tour.

“It’s not a f-cking secret anymore, is it?” he told them while laughing. “That’s what happens, Warner Bros., when you walk out of your set and there’s our fans. Well, we tried to keep it a secret.”

The actor then walked to a trailer labeled “B.A.” and gave the public a brief glimpse of Affleck.

Warner Bros. and representatives of Affleck are yet to confirm whether the actor will indeed be joining the “Aquaman” sequel, based on reports from Deadline and People.

“Aquaman and the Lost Kingdom” is the follow-up to the 2018 film “Aquaman.” It stars Momoa as the titular superhero, the son of a human lighthouse keeper and an Atlantean queen. It is slated for release in March 2023.

Plot details on the film are yet to surface as of this writing, but some cast members who are expected to appear are Amber Heard, Patrick Wilson, Yahya Abdul-Mateen II, Dolph Lundgren and Randall Park, among others.  /ra