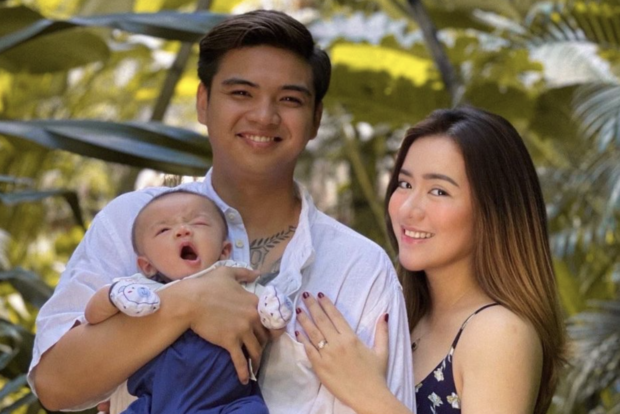 Angeline Quinto has been seen wearing a ring during her vacation with her non-showbiz partner Nonrev Daquina, leading fans to speculate that the couple is now engaged.

The singer showed moments of her vacation with Daquina and their son Sylvio at the Lost Villa resort in Quezon, via her Instagram page yesterday, July 28. A ring can be seen on Quinto’s finger in one of the photos where she and Daquina are both posing with their baby boy.

“So much fun at [Lost Villa] with my family! I’m grateful that we got to spend a happy and relaxing time for [Baby Sylvio’s] first out of town trip!” she said.

Quinto did not reveal whether she and Daquina are indeed engaged, though some fans have noticed the ring and asked Quinto if her partner has popped the question.

“Is that an engagement ring Angge?” one @bebethxo asked her.

“‘Yung singsing ang napansin ko. Pansin n’yo rin ba?” one @arch_share02 told fellow netizens. (I noticed the ring. Did you notice it too?)

Quinto initially opted to keep Daquina’s identity a secret from the public, only giving a glimpse of his face during her maternity shoot last February.

The singer confirmed her pregnancy with Sylvio in December last year, through an interview with TV host Boy Abunda. She and Daquina then welcomed the baby boy in April.

Sylvio is Daquina’s fourth child, as he has three daughters from past relationships. Last May, Quinto spoke about her willingness to reach out to Daquina’s other kids since she wants to meet them better as Sylvio’s siblings.  /ra