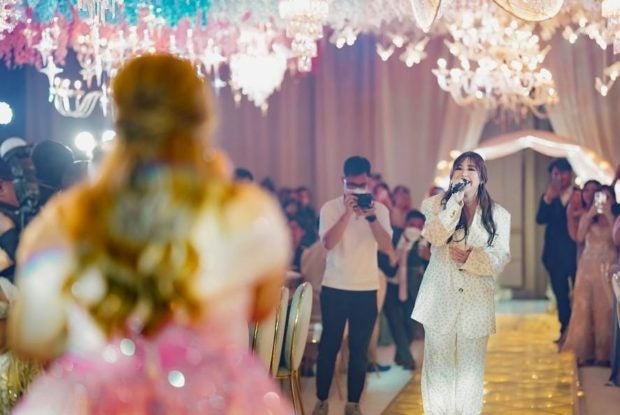 Moira Dela Torre treated one of her fans to a surprise by becoming a performer in the latter’s 18th birthday celebration over the weekend.

The singer can be seen serenading her debutante fan, Stella Duque, during her 18th birthday party at Dusit Thani Hotel Davao, as shown on Nice Print Photography’s Instagram page yesterday, July 18. Dela Torre can also be seen hugging Duque and singing with her in front of the party guests.

“Our debutante Stella as surprised by her parents with a performance from the one and only @moiradelatorre in Dusit Davao,” the photography studio stated.

The event was held last Saturday, July 16, as per a release by Dela Torre’s talent agency Cornerstone Entertainment, also yesterday.

“Knowing how much she loves Moira and her music, Stella’s parents came up with the idea of inviting their daughter’s ultimate idol to her special day,” the agency stated.

Aside from Dela Torre’s songs, the debutante’s family also requested for a rendition of the songs “Torete” and “Fix You.”

Dela Torre is known for the songs “Paubaya,” “Ikaw at Ako” and “Malaya,” among others. She currently serves as a judge in the second season of the reality talent competition “Idol Philippines.”  /ra