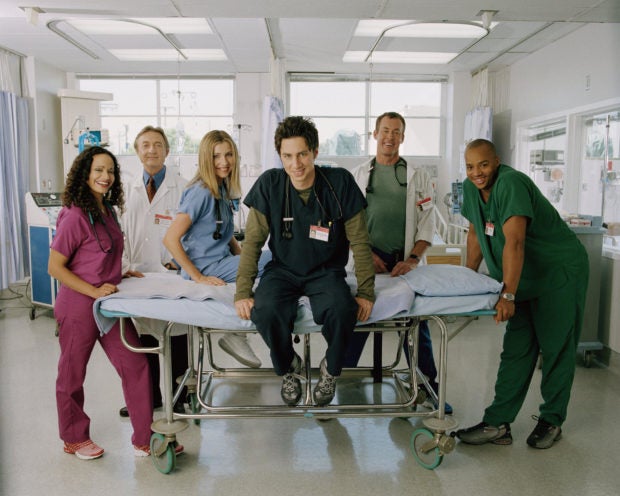 The series “Scrubs” was a cult show on American television in the 2000s. Image: Touchstone Production via ETX Daily Up

Were you a fan of “Gossip Girl” or “Scrubs,” or even “The Office”? These series from the past, which had their final season years ago, have recently been given a new lease on life thanks to “rewatch” podcasts.

“Smallville” fans got a nice surprise gift at the end of June. Michael Rosenbaum, the actor who played the character of Lex Luthor in the cult series of Noughties, announced the launch of the podcast “Talkville.” Accompanied by Tom Welling, the series’ “Superman,” this podcast is a perfect example of a “rewatch podcast.”

So what exactly is a “rewatch podcast”? This relatively new genre of podcast has become very popular in recent years. Brought to you by former actors, directors or crew members of a TV show, they watch the show again while revealing behind-the-scenes secrets, episode after episode. A kind of nostalgic pilgrimage.

Cult TV shows to be re-experienced in audio

“Smallville” is not the only TV show to ride the podcast audio trend, which has been gaining in popularity since the COVID-19 pandemic. When the pandemic paused filming on series and movies, the entertainment world had to reinvent itself to survive. And one of the ways it did that was through audio.

The “New Girl” TV show, also a big winner during lockdown, brought good news to fans in early 2022. Zoey Deschanel, the comedy star who played the whimsical Jess, along with Lamorne Morris and Hannah Simone, who played Winston and Cece respectively, launched a “rewatch” podcast of “New Girl.” The new podcast called “Welcome to Our Show” debuted its first episodes late January 2022 but it is far from the first of its kind.

“One Tree Hill,” “Scrubs,” “The OC” and “The Office” were all beloved by pop culture fans and have all had a kind of rebirth through their “rewatch” podcasts.

While nostalgia has taken over social networks, fashion and even music, the trend is also present in the world of TV shows. During the first lockdowns, the series “New Girl,” available at the time on Netflix, found success among viewers, some of whom hadn’t seen it before. For those who were already fans, it provided a feeling of comfort that was particularly valuable in the midst of a stressful period.

In the United States, sitcom “The Office” was the most watched series in streaming in 2020, ahead of more recent series. The cult comedy had already been the subject of a “rewatch podcast” called “Office Ladies” back in 2019, launched by two actresses from the show: Jenna Fischer a.k.a. Pam Beesly and Angela Kinsey a.k.a. Angela Martin. Over the course of the episodes, the two actresses/hosts of the podcast welcomed their former castmates as guests: John Krasinski, Mindy Kaling, B. J. Novak, Rainn Wilson and many others have all taken up the microphone of “Office Ladies” at some point.

Actresses from the show “One Tree Hill” Sophia Bush, Hilarie Burton and Bethany Joy Lenz launched “Drama Queens,” a podcast that revisited the success of the teen series that had been a hit in the 2000s. And there is no shortage of other examples: “The OC” with “Welcome to the OC,” “Gossip Girl” with “XOXO,” “Scrubs” with “Fake Doctors, Real Friends with Zach and Donald,” “It’s Always Sunny in Philadelphia” with “The Always Sunny Podcast” and “Supernatural” with simply “Supernatural Then and Now.”

And the renewed interest could even lead to reunions or reboots of the shows. Recently, the cast of the medical series “Scrubs,” with Zach Braff, Donald Faison and Sarah Chalke, met and spoke about their desire to return to the small screen, this time for new scenes. This was confirmed by series creator Bill Lawrence.

“Because of that podcast, my kids started watching ‘Scrubs,'” revealed Judy Reyes, who played the role of Carla Espinosa.

Between fiction and reality

Some of these podcasts are so successful that the production companies of current shows are themselves launching in-house audio content. The series “The Boys,” whose third season dropped in early June on Prime Video, unveiled “The Boys: Deeper and Deeper,” a podcast based on the character of The Deep, a half-human, half-fish superhero and above all, a sexual abuser whose acts have been covered up by Vought, the organization in charge of the “Supes.”

In this podcast, the character played by Chace Crawford, formerly on “Gossip Girl,” goes back into his childhood traumas to explain his current behavior. A fictional podcast, available on Audible, which not only extends the offering for fans on various platforms, but also highlights the importance of podcasts within the universe of series. Between fiction and reality, the line between series and podcasts is becoming increasingly thin. The audio trend is even implicated in the plots of programs themselves. JB