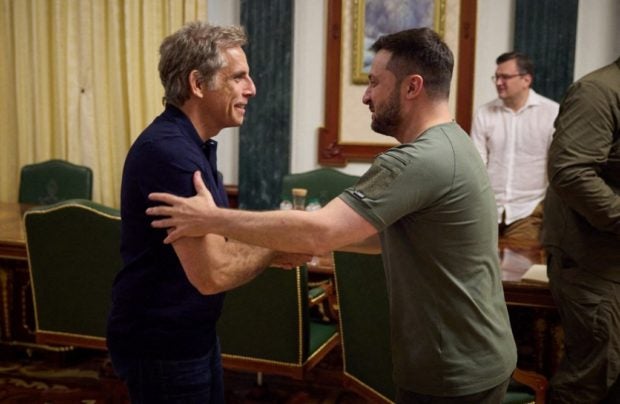 Hollywood star Ben Stiller met Volodymyr Zelensky in Kyiv on Monday, hailing the comedian-turned-president as “my hero” for rallying the world’s support for Ukraine in the face of Russia’s invasion.

“It’s a great honor for me… you’re my hero!” said Stiller, a United Nations goodwill ambassador who met the Ukrainian leader on World Refugee Day.

“What you’ve done, the way that you’ve rallied the country, the world, it’s really inspiring,” said the 56-year-old American comedian referring to Zelensky’s countless speeches to audiences around the world to rally support for his embattled country.

Footage of their meeting was released by Zelensky’s office.

Earlier on Monday, Stiller visited the Kyiv suburb of Irpin, the scene of fierce battles early on in the invasion and the closest Moscow’s army got to the capital since it sent troops into Ukraine in February.

“I feel it’s hard to understand what’s actually going on here if you haven’t been here,” he told Zelensky.

“I was in Irpin this morning… and the actual level of destruction, you see it on TV, you see it on social media, but it’s something else to actually see it, feel it and then to talk to the people,” he said.

Speaking in English, Zelensky thanked Stiller for coming and told him it was “very important” for him to keep reminding people what was going on in Ukraine.

The pair also acknowledged their shared interest as comedy actors.

“You quit a great acting career,” said Stiller, who is best known for his comedy roles in “Meet the Parents” and the “Night at the Museum” films, in a nod to Zelensky’s former career as a comedy actor.

“Not as great as yours,” Zelensky retorted, both laughing.

Before being elected in 2019, Zelensky was best known for his role in “Servant of the People,” a comedy satire in which he played a high school teacher who unexpectedly becomes Ukraine’s president. DC

Read Next
Kim Chiu, Xian Lim tease new film together after eight years
EDITORS' PICK
Is it safe to talk politics again at family gatherings? ‘The Reconciliation Dinner’ shows us what that’s like
House energy committee chair Arroyo bats for cheap electricity
Pagasa: Warm, sunny Sunday in most parts of PH
vivo’s coming to town to grant wishes with more holiday promos
EDITORIAL: To a bike-friendly future
The Best Tech Gifts For The 2022 Holidays
MOST READ
LOOK: Vhong Navarro transferred to BJMP detention facility in Taguig
The Elephant Man in the Senate
Posh village as ‘shabu’ haven
LOOK: Zanjoe Marudo bonds with Ria Atayde, her family
Don't miss out on the latest news and information.