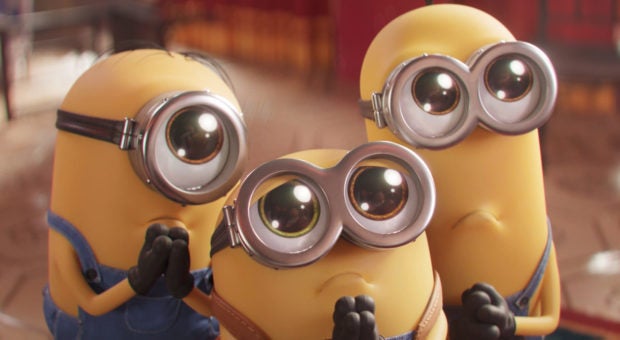 “Minions: The Rise of the Gru” was screened at the opening of the Annecy Film Festival in France on Tuesday ahead of its worldwide release in early July. Image: 2020 Universal Pictures via AFP

Completely stupid but terribly endearing, the Minions have become one of the most profitable bunch of characters in animation.

Their latest escapade, “Minions: The Rise of the Gru,” was screened at the opening of the Annecy Film Festival in France on Tuesday ahead of its worldwide release in early July.

It is the fifth instalment in a franchise that began with “Despicable Me” in 2010 and has grossed $3.7 billion at the box office, according to IMDB, without even counting the vast sales of cuddly toys and other Minion-related paraphernalia.

The new film promises another frenetic succession of gags, action and slapstick stupidity.

“The whole point of these films is just to kind of be silly and have fun,” director Kyle Balda told AFP.

This time, there are nods to classic 1970s Kung Fu films and a Minions cover of The Rolling Stones’ “You Can’t Always Get What You Want.”

The little yellow doofuses were just side characters in the first films, but proved so popular that they got their own spin-off, “Minions,” in 2015.

It was risk putting characters who barely speak a comprehensible language at the heart of a film, but it paid off with $1 billion in ticket sales.

To make people laugh without dialogue, “for an animator, it’s like their Mount Everest,” said Balda.

“Of course they’re speaking, but nobody understands what they’re saying,” added the director, who said the team is inspired by classic physical comedians like Charlie Chaplin and Jacques Tati.

The new film goes back to the origins of Gru, the Minions’ master, as he tries to earn his place among an elite group of supervillains while still a teenager.

Naturally, things don’t quite go according to plan.

The “Despicable Me” films have been a cross-Atlantic affair from the start, a collaboration between studios Illumination in Los Angeles and Mac Guff in Paris.

Paris-based animator Pierre Coffin has provided the voices for the Minions from the start, and served as co-director on the first four films.

Their success has allowed Illumination to compete in the same league as the giants of United States animation, Pixar and Dreamworks, with other hits including “Sing,” “The Secret Life of Pets” and “The Grinch.”

More is on the way, with the Illumination team next tackling a movie version of the legendary video game “Super Mario Bros,” expected in 2023.

This is also unlikely to be the last we hear from the Minions.

“I don’t think it’s over,” said Balda. “There is clearly a future for these characters.” JB