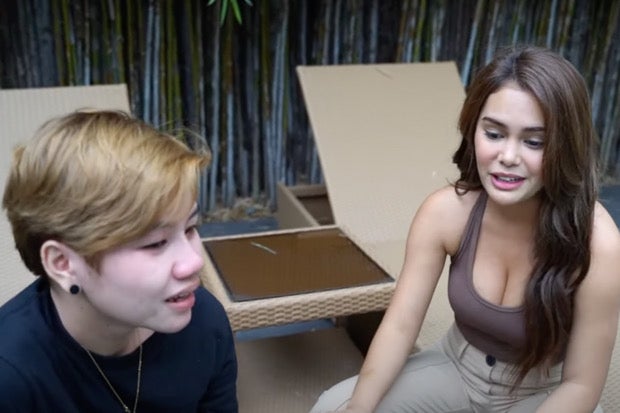 Ivana Alawi and her house helper May. Image: screengrab from YouTube/Ivana Alawi

Ivana Alawi made her house helper’s dream come true after the actress treated her to a nose plastic surgery at celebrity doctor Vicki Belo’s clinic.

The actress-vlogger narrated how her helper, May, once talked to her about wanting to get her nose fixed as she experiences bullying because of how it looks like. Alawi shared this in a vlog on her YouTube channel yesterday, June 14.

(What’s important for me is to make other people happy. For those who are against plastic surgeries, [I think] it is just fine [to do it] if it is the person’s dream because it is not as if we are forcing her to do it. It is her body and I will do whatever can give her confidence and make her happy.)

Alawi sent off a chopper to pick up May from Batangas where she had her vacation. The actress then pranked May by initially telling her that fellow helpers are complaining about her attitude. May broke into tears which prompted Alawi to reveal the plan.

The two of them, together with Ivana’s siblings Mona and Hash, went to Belo’s clinic for consultation and were entertained by the celebrity doctor. Belo explained the procedure that will be done, adding that it also makes her happy to help other people gain confidence.

After the consultation, Ivana pranked Hash by putting fake stitches on her nose and telling him that she was the one who got her nose fixed. Hash, seemingly unamused, was “shocked” because the actress did not tell him as well as their mother Fatima beforehand, making Ivana burst into laughter and told him the truth.

Meanwhile, Ivana also recently treated her family, staff and a random stranger to a shopping spree where she spent nearly P300,000 in all the items they got. Last month, she and her siblings also went on a trip to Thailand which marked their first trip abroad since the pandemic started. JB

WATCH: Ivana Alawi surprises mom, sister with their own house