MANILA, Philippines — Film icon Susan Roces, known as the “Queen of Philippine Movies,” was laid to rest on Thursday.

The casket bearing the remains of the actress was interred next to the tomb of her late husband, Fernando Poe Jr. (FPJ) at the Manila North Cemetery.

Roces passed away last Friday, May 20, due to cardiopulmonary arrest. She was 80.

During the last night of her wake at the Heritage Park in Taguig City, her family and close friends paid the veteran actress tribute by recalling their last moments with her.

They also remembered her as a loving and thoughtful friend, who was always concerned about the welfare of those close to her. 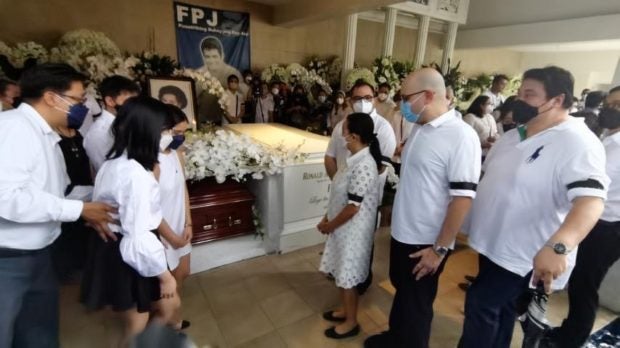 In a eulogy during the final night of her mother’s wake, Sen. Grace Poe expressed gratitude to the woman she said she “owes everything to.”

“For now I’ll say goodbye. I will just say that in my heart, you will be the woman that I most admire and you will be the woman that I’m most scared of. In the past. I kept telling people — my staff — please don’t tell her I have a hearing today that will be televised because for sure she will call me and give me tips about what I said or what I look or what’s the best camera angle for me,” she said.

“But now, you’re not there anymore physically, but it’s even more scary because I know you’re around, so even in my thoughts you’ll be present,” Poe added.

The senator also asked her mother for guidance.

“Please help me always stay true to myself and remind me if I’m already taking the wrong path or forgetting what you’ve taught me. There’s nothing I want more than to make you and Papa proud,” Poe said as she looked at her mother’s casket.

For his part, Roces’ nephew, Jeff Sonora, described the film icon as a “pillar.”

“She is always the pillar, siya ‘yung tao na (she is the person that) when you’re down, siya palagi ‘yung (she is always the) foundation. She will guide you… she’s always the compass that will lead you to the right direction,” he said.

Before her passing, Roces’ last on-screen role was her portrayal of Lola Flora, the grandmother of Cardo Dalisay (Coco Martin) in the television series adaptation of “FPJ’s Ang Probinsyano” movie. MUF/JB