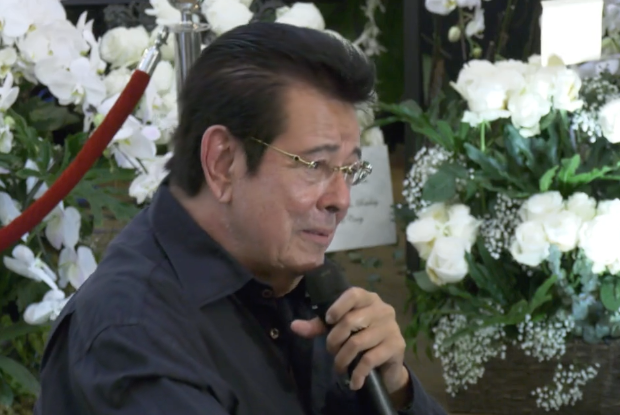 Eddie Gutierrez teared up as he recalled fond memories with his longtime screen partner, Queen of Philippine Movies Susan Roces, who passed away last Friday, May 20.

The veteran actor, who starred in various films with Roces, was in tears as he gave a eulogy for the actress at her wake at The Heritage Park in Taguig City, as seen on the Facebook page of Roces’ daughter Sen. Grace Poe yesterday, May 24.

(During her last birthday, I called her. I told her, “80!” “Yes, I am now 80,” she said. We talked for almost an hour. She told me, “Eddie, our old colleagues are gone now. [Romeo Vasquez], Amalia Fuentes, Jose Mari Gonzales, Liberty Ilagan, Lito Legaspi. We are the only ones left.)

Aside from this, Gutierrez looked back at the time Roces contacted him after he figured in an accident. He also recounted the projects he had with Roces under the production company Regal Entertainment.

(All of those were [hits in the] box office and we were really friends for 60 years, maybe more… We were very close. Fans would ask me, “Eddie, did Susan ever become your girlfriend?” I told them, “No. I never courted Susan. We were just partners.”)

“I miss you. You will always be a part of my life. See you in heaven!” he told the departed actress while sobbing.

Gutierrez also told a story about him and Roces waiting at a coffee shop in a hotel abroad to meet with Elvis Presley. They were with actress Rosemarie Sonora and a cameraman during the said encounter with the King of Rock and Roll, and they got to take a photo with Presley as well.

They did not get to spend much time with Presley as he had other commitments that day, though he promised that he would send them their photo together. Roces had the original copy of the said photo, as Gutierrez told her that she could keep it.

(When we returned to the Philippines, after three or four days, a copy of our photo came. Susan had it photocopied. She gifted it to me, framed. So those are my memories with Susan. Everyone knows that Susan is not just beautiful but also has a beautiful heart, so I will really miss her.)

Roces’ passing was announced by Poe last Friday. The senator stated that the veteran actress passed away peacefully, surrounded by family and close friends.  /ra